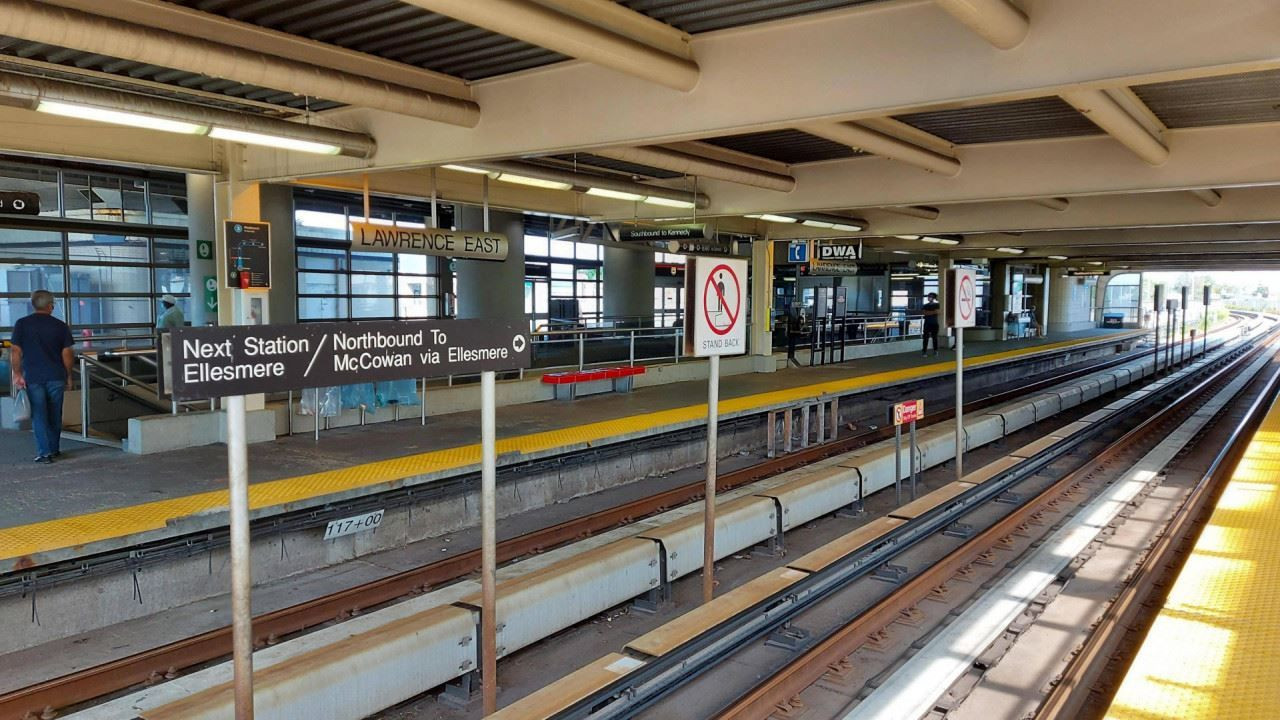 Lawrence East is situated at Lawrence Avenue between Kennedy Road and Midland Avenue, in Scarborough. The station sits directly west of the Uxbridge Subdivision, owned by Metrolinx and served by the GO Stouffville Line (although GO trains do not stop). Lawrence Avenue passes over the station and both rail lines via a bridge. The station's only fare line and bus entrance are accessed via a service road looping under the western abutment of the road bridge. An outdoor pedestrian underpass owned by the TTC but physically separate from the rest of the station connects the main plaza north of the headhouse to a matching service road looping under the eastern bridge abutment.

The area within walking distance of the station is predominantly industrial, with few trip attractors aside from employment. However, the station is well-served by the 54 Lawrence East and 954 Lawrence East Express bus routes, which contribute heavily to the station's 2018 count of 8,000 daily weekday customers, and connect via a terminal within the fare paid area.

As with all Line 3 stations, Lawrence East features two side platforms, signed as "Southbound to Kennedy" and "Northbound to McCowan via Ellesmere" (these designations vary by station on Line 3). Both platforms sit at grade. An underpass within the paid zone connects the east (northbound) platform to the entrance and bus terminal on the west (southbound) side, with a staircase and an escalator at each end. Although the station is enclosed, the southbound platform includes a shelter at the south end to act as a windbreak, particularly in harsh winter weather. As Line 3 was built before the AODA came into force, Lawrence East was not built to be universally accessible; Line 3 is also expected to be replaced by an extension of Line 2, so the TTC has not retrofitted the station with elevators.

Lawrence East opened in 1985 and its design aesthetic, consistent with the rest of Line 3, is a product of its time. The platforms are enclosed by a flattened arch roof supported by steel bents. The flat portion of the roof, above the tracks, is solid, with the walls and curved upper corners composed of blue glazed glass and bare aluminum mullions. In terms of general appearance, Lawrence East is most similar to its neighbour to the north, Ellesmere, however the underpass between the platforms at Lawrence East is more spacious.

Lawrence East has an unusual layout due in part to its location next to the Uxbridge Subdivision. The north underpass connecting the eastern and western service roads, is maintained by the TTC but entirely separate from the rest of the station, a unique design element. This means that a passenger arriving from the eastern service road and wishing to board a northbound train must use both underpasses, first crossing to the west side to the entrance and fare line, then back east to the platform.

Another unusual feature of the station's layout is that although it is not publicly advertised as universally accessible, the route between the southbound Line 3 platform, bus terminal, and entrance is technically barrier-free, featuring automatic doors, wide fare gates, and no steps. This makes Lawrence East the only TTC station to be technically (though not officially) accessible in only one direction.

Line 3 played an important role in the 2018 edition of Nuit Blanche, serving as both a gallery for installations in several stations and as an all-night shuttle to installations at Scarborough Civic Centre and inside the Scarborough Town Centre Mall. Following the event, Lawrence East retained the piece Mirrors of Babel - Universal Language by Shalak Attack. The installation consists of surreal depictions of indigenous iconographic themes, printed on decal wrap and pasted on the lower windows of the platform walls. The interpretation panel describes the piece as "a mural that depicts one woman's journey across a divided land and her will to overcome the borders that surround her, allowing Mother Nature to show her the way."