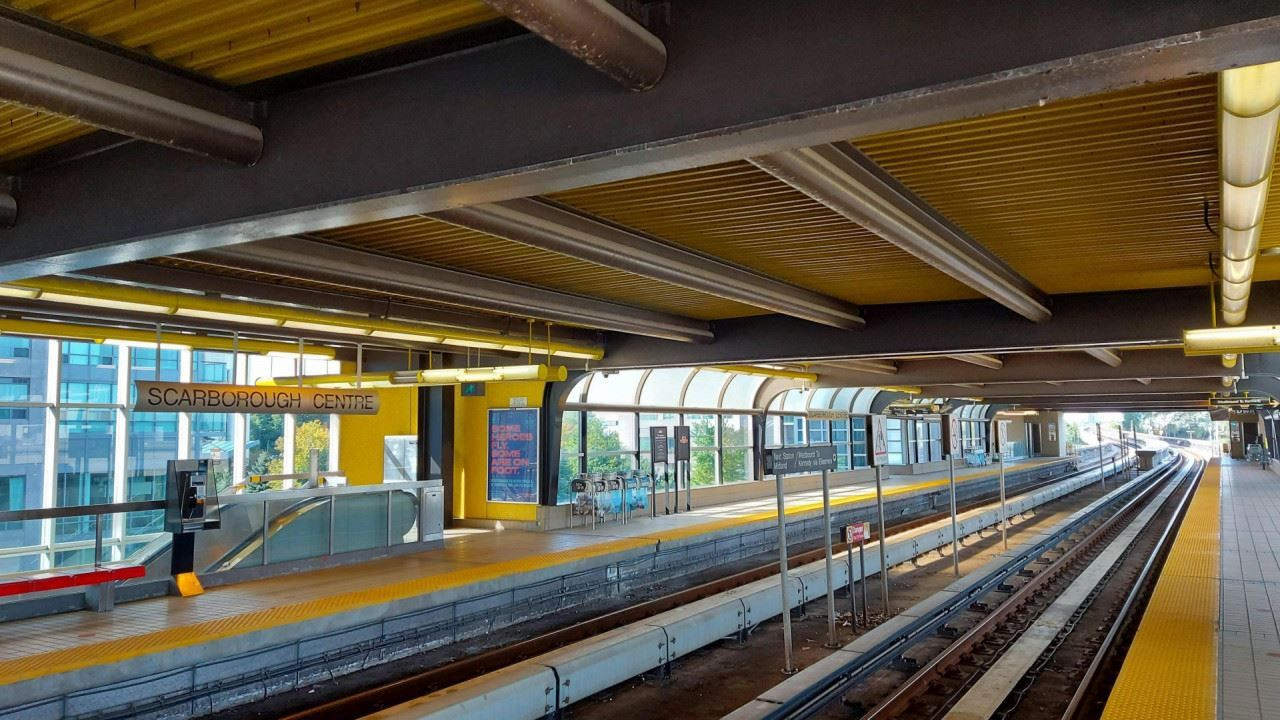 Scarborough Centre is easily the most important station on Line 3 besides Kennedy: of the 35,000 daily weekday trips on Line 3 in 2018, over 23,000 began or ended at this station. This is hardly surprising, as the station functions as the primary rapid transit gateway to northern and eastern Scarborough, Durham Region, and even destinations as far away as Ottawa and Montréal.

The station is arranged on three levels. Line 3 trains stop on the highest level, elevated above grade. As with all Line 3 stations, Scarborough Centre features two side platforms, signed as "Westbound to Kennedy via Ellesmere" and "Eastbound to McCowan" (compass designations vary by station on Line 3). Although the station is enclosed, each platform includes a small internal shelter at the west end to act as a windbreak, particularly in harsh winter weather. Both platforms connect to the main concourse one level below via stairs, escalators, and elevators. The concourse is also built above grade, and spans the length of the station, featuring two exits at the east and west ends. The eastern exit is by far the busiest, as it connects to a skywalk between Scarborough Town Centre Mall, the plaza of Scarborough Civic Centre, and the regional bus terminal opposite the TTC entrance. The quieter western entrance lets out onto a privately owned public plaza serving multiple high-rise condo towers, and eventually leading to Borough Drive.

Below the concourse, partially sunken below grade is the bus terminal, connected by stairs, elevators, and escalators. Below the skywalk at the eastern entrance one level above, the bus terminal is partitioned into east and west halves. The western half of the terminal serves TTC routes within the fare paid zone. Under the skywalk, a small indoor area contains a fare line and mechanical spaces, linking directly to the east end of the terminal, which serves regional and intercity carriers. The terminal is maintained by the TTC, and the stairs leading down from the skywalk to the regional terminal bear TTC asset IDs.

Scarborough Centre opened in 1985 and its design aesthetic, consistent with the rest of Line 3, is a product of its time. The platforms are enclosed by a flattened arch roof supported by steel bents. The flat portion of the roof, above the tracks, is solid, with the walls and curved upper corners composed of blue glazed glass and bare aluminum mullions. Unlike the bare or painted concrete walls and floors typical of most other Line 3 stations, many of the walls at Scarborough Centre are tiled with circular yellow tiles in a honeycomb arrangement, and the platform and Concourse floors are also tiled.

Scarborough Centre dominates ridership statistics for Line 3, both in walk-in customers and bus transfers. The station serves the most TTC bus routes of any subway or RT station, with 16 connecting routes and numerous branches, before considering regional carriers. As a result of this high importance, Scarborough Centre has been retrofitted since opening to be fully wheelchair accessible from all entrances, the only Line 3 station besides Kennedy to have received this overhaul. The 2 elevators installed provide some of the most efficient passenger circulation of any retrofitted station, with each elevator connecting to one Line 3 platform, the main concourse, and the bus terminal. With its transit oriented development, elevated multilevel character, and even UTDC/Bombardier Mark I linear induction ICTS rolling stock, Scarborough Centre is perhaps the TTC station most evocative of the vision refined and executed by the Vancouver SkyTrain, of a modern and efficient intermediate capacity rapid transit system.

Scarborough Centre is also unique among Line 3 stations for being the only station planned for nearby (though not identically positioned) replacement by the future Line 2. Given maturation and continued growth of the transit-oriented commercial, residential, and civic district around the station, and its ongoing importance for regional connections, providing a replacement for the Line 3 Scarborough Centre station has been the primary objective of a replacement Line 2 extension since its conception.

The success of Scarborough Centre can be optimistically interpreted as demonstrating the prevalence of transit ridership even in the inner suburbs, and the planning power of local hubs of transit oriented development. On the other hand, Scarborough Centre's singularly dominating presence among local bus routes is a testament to how little rapid transit has thus far penetrated into Scarborough, that such a high volume of buses (especially from the north and east) traverse long distances to connect to rail service at the first outpost of the subway system they can reach.

Line 3 played an important role in the 2018 edition of Nuit Blanche, serving as both a gallery for installations in several stations and as an all-night shuttle to installations at Scarborough Civic Centre and inside the Scarborough Town Centre Mall. Scarborough Centre temporarily hosted the piece Mord'iim by Mediah, consisting of abstract illustrations including a depiction of the Tower of Babel, printed on decal wrap and pasted on the lower windows of the platform walls. The interpretation panel described the piece by explaining that "Mord'iim is an artistic take of the Hebrew word Mordim meaning 'they rebel'. Inspired by the Babel story, the artist says his work expresses the 'displacement and scattering' of humans across the earth."