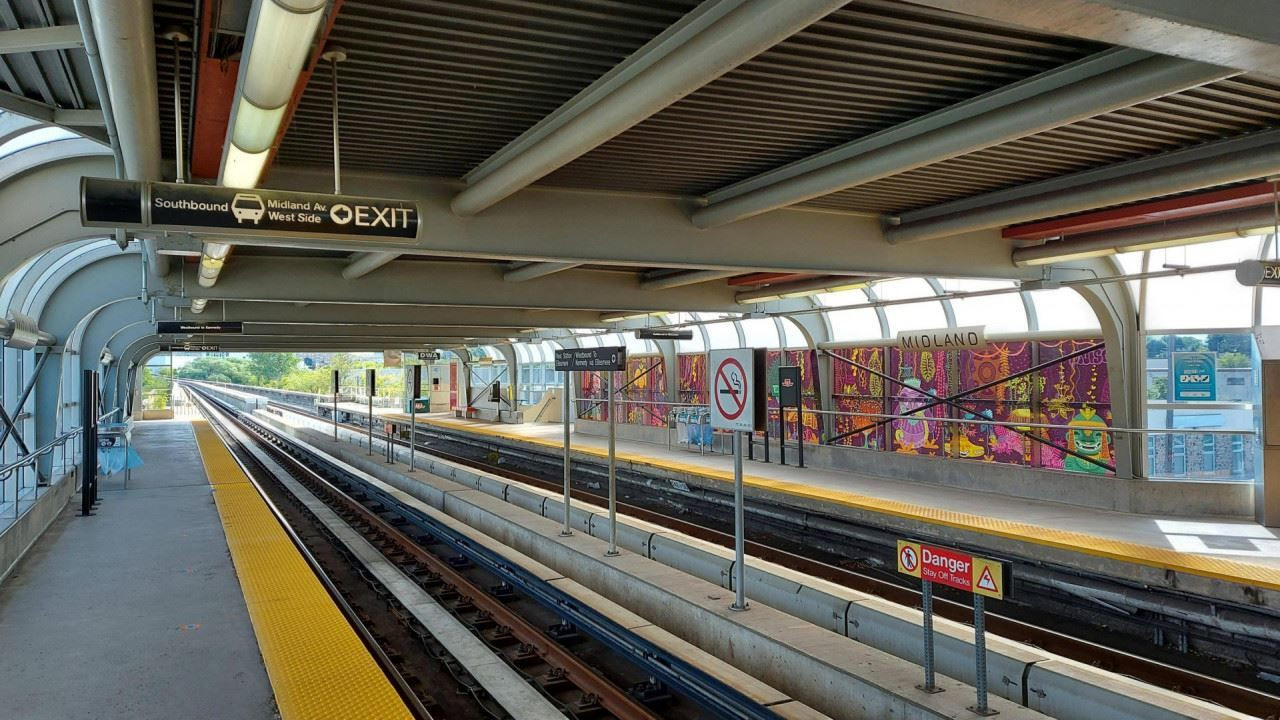 Midland is situated at Midland Avenue, 300 m north of Ellesmere Road, in Scarborough. Line 3 is elevated at this location, and the station straddles the road, with headhouses and fare lines on both the east and west sides, under the Line 3 guideway. Transfer is conveniently available to northbound and southbound buses on Midland Avenue, which stop on the street in front of both entrances. Despite having a direct bus transfer, the station sees little ridership, being situated in a predominantly industrial area, with few trip attractors aside from employment.

As with all Line 3 stations, Midland features two side platforms, signed as "Westbound to Kennedy via Ellesmere" and "Eastbound to McCowan" (compass designations vary by station on Line 3). Both headhouses connect directly with both train platforms. As Line 3 was built before the AODA came into force, Midland was not built to be universally accessible; Line 3 is also expected to be replaced by an extension of Line 2, so the TTC has not retrofitted the station with elevators.

Midland opened in 1985 and its design aesthetic, consistent with the rest of Line 3, is a product of its time. The platforms are enclosed by a flattened arch roof supported by steel bents. The flat portion of the roof, above the tracks, is solid, with the walls and curved upper corners composed of blue glazed glass and bare aluminum mullions.

Midland is not only one of few elevated stations in the TTC network, but also perhaps the most palpably elevated of all for passengers, given its position above the traffic on Midland Avenue and its predominantly glass exterior shell.

Midland has the unfortunate distinction of being the second-least used rapid transit station in Toronto, after neighbouring Ellesmere, with 2,440 daily weekday boardings in 2018. Its low usage is largely a product of its location in an industrial park, and perhaps further exacerbated by the presence of Ellesmere Station 700 m southwest by shortest walking distance. Still, the combined ridership of Midland and Ellesmere would be less than half that of Lawrence East, 3 km to the southwest. As a testament to ridership being lower than expected, only 2 of the 4 planned escalators were installed, both leading to the western headhouse. The two escalator channels between the eastern headhouse and the train platforms sit empty, and have been covered with plywood to prevent falls.

Lastly, Midland has the distinct misfortune of being arguably the most foul-smelling station in Toronto, thanks to steady off-gassing from a cardboard recycling plant next door to the northwest. The pungent sulfuric odour regularly greets passengers on trains approaching from both directions, earning Midland the reputation of being perhaps the only TTC station distinguishable by smell alone.

Line 3 played an important role in the 2018 edition of Nuit Blanche, serving as both a gallery for installations in several stations and as an all-night shuttle to installations at Scarborough Civic Centre and inside the Scarborough Town Centre Mall. Midland temporarily hosted the piece Mirrors of Babel - Natural Love by Planta Muisca, consisting of colourful illustrations of indigenous iconographic themes, printed on decal wrap and pasted on the lower windows of the platform walls. The interpretation panel described the piece as "a site-specific work inspired by the ancient story of Babel. 'Love is the language that connects us all to Mother Nature and to our higher self,' says the artist."