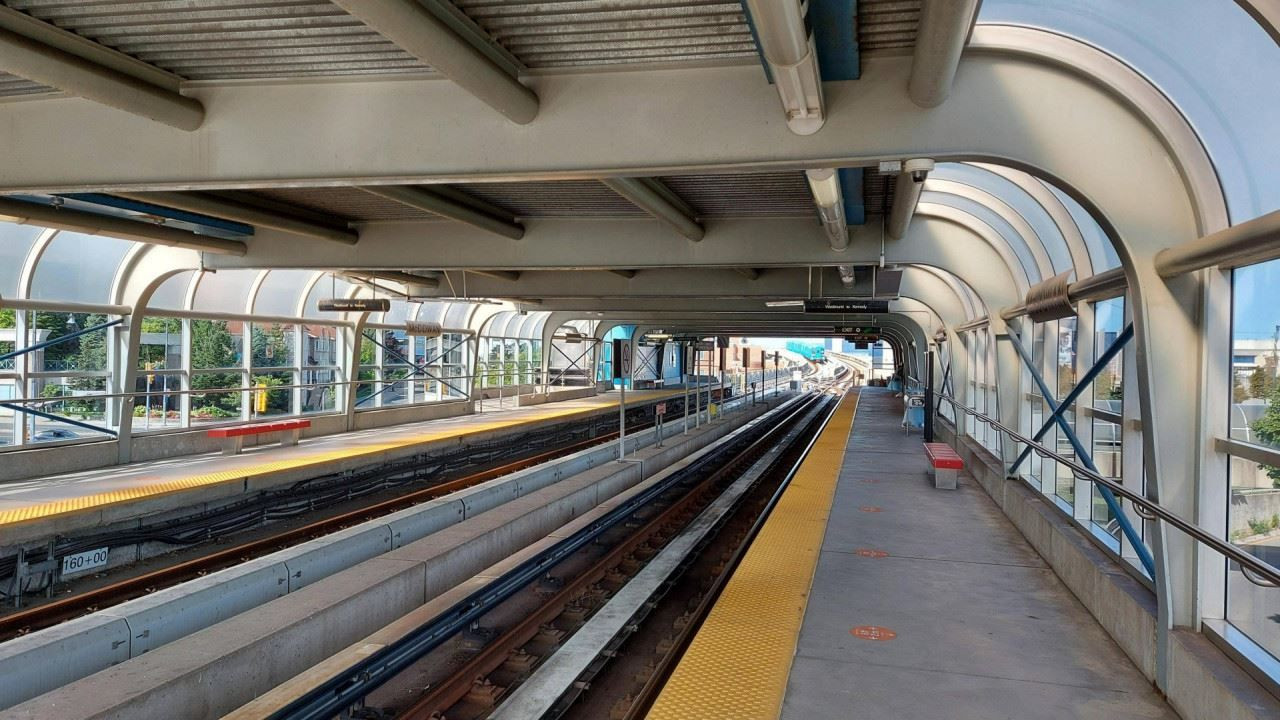 McCowan, located on a traffic island at the northeast corner of McCowan Road and Bushby Drive in Scarborough, is the eastern/northern terminus of Line 3. Both tracks carry on east of the station to McCowan Yard, the only maintenance and storage facility serving Line 3. The station has few local trip attractors that are not more conveniently accessible from Scarborough Centre station, barely 500 m west; the surrounding land features parking lots, an empty field, and one grocery store. All bus routes passing the station do so on their way to or from the terminal at Scarborough Centre, the driveway for which sits across the street from McCowan station. Despite these challenges, McCowan managed to serve over 3,800 daily weekday trips in 2018.

The station is arranged on three levels. Line 3 is elevated at this location, and trains serve the highest level. Below this at the western end is a headhouse with two stacked concourse levels, both of which contain fare lines. The upper concourse leads to the sidewalk north along McCowan Road via a pedestrian bridge over a sunken traffic ramp. The lower concourse leads to the sidewalk at the northeast corner of McCowan Road and Bushby Drive. The two concourses are connected both inside and outside the fare paid area.

As with all Line 3 stations, McCowan features two side platforms, both signed as "Westbound to Kennedy via Ellesmere" (compass designations vary by station on Line 3). Both platforms connect to the upper concourse via stairs, and the north platform connects to the lower concourse via ascending and descending escalators. As Line 3 was built before the AODA came into force, McCowan was not built to be universally accessible; Line 3 is also expected to be replaced by an extension of Line 2, so the TTC has not retrofitted the station with elevators.

McCowan's side platform arrangement is unusual for a TTC terminus: the TTC has typically designed permanent termini with island platforms, so that trains board from alternating sides. Moreover, the scissors crossover at McCowan is on approach to the station from the west, so each train can only serve one platform before reversing westbound. As a result, the north platform is used for most service, with eastbound trains crossing over on arrival, and then departing straight westbound. The south platform is open to the public, but typically only used for trains offloading before continuing east into the yard. This operational pattern is enforced by station signage as well as two push gates at the bottom of the stairs leading from the south platform with prominent "do not enter" symbols.

McCowan opened in 1985 and its design aesthetic, consistent with the rest of Line 3, is a product of its time. The platforms are enclosed by a flattened arch roof supported by steel bents. The flat portion of the roof, above the tracks, is solid, with the walls and curved upper corners composed of blue glazed glass and bare aluminum mullions.

The distance between McCowan and Scarborough Centre stations is the shortest on the TTC network outside of downtown Toronto. As a point of trivia, McCowan is both the easternmost station in the TTC rapid transit network, and the only station name to feature a "Mc" prefix. Its status as the easternmost outpost of the system will likely be assumed, perhaps surprisingly, by the planned Line 2 station at Lawrence and McCowan, which due to the tilt of Toronto's street grid away from true compass directions, is technically further to the east.

McCowan is unique for the worse in how it interfaces with pedestrian infrastructure: the station headhouse interrupts the sidewalk, forcing all pedestrian traffic on the east side of McCowan Road to pass through the headhouse and change levels via a staircase. In this way, of all TTC stations, McCowan is exceptionally inaccessible.

The unusual layout of McCowan station, seemingly overbuilt for the traffic it handles, reflects the original intent for the Scarborough RT (as it was known) to eventually be extended northeast. Empty escalator channels from the south platform to the lower concourse mirror the layout of the north platform. These, in addition to the very existence of the south platform, complicated pedestrian and car infrastructure, and empty lands surrounding the station, reflect the long-range planning goals for more intense development spreading outward from Scarborough Centre. This may yet come to pass, as the replacement Line 2 extension is set to follow McCowan Road past the site of the current McCowan station.