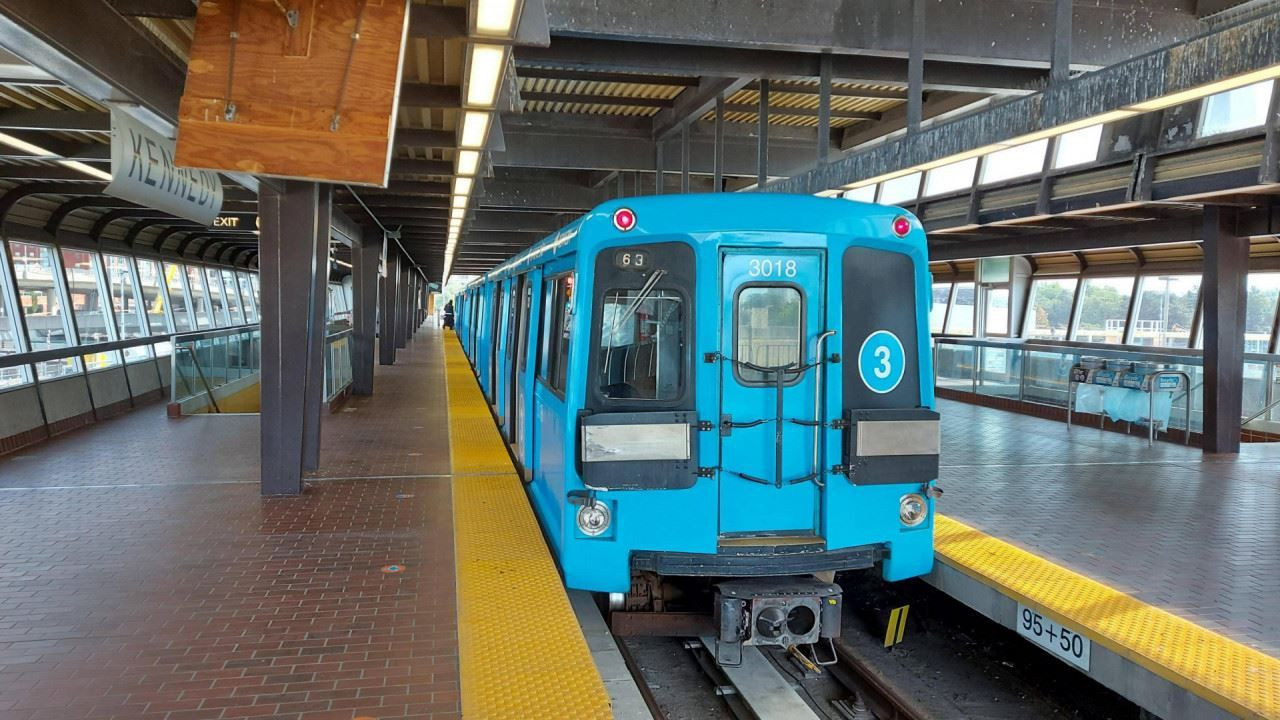 Kennedy is a large complex arranged in four levels, on a primarily east-west axis. Line 2 serves the lowest underground level, which consists of one island platform. Trains pull into alternating sides via a scissors crossover west of the station, offloading and boarding from both sides. As two trains are commonly stopped at the platform simultaneously under this arrangement, digital signs at the bottoms of the stairs show passengers which train is due to depart next. Tail tracks east of the station permit storage for two trains. The overall atmosphere of the Line 2 platform level is dim and earthy, given the low ceilings and pervasive use of brown and orange tones in the tilework and trim.

Above the Line 2 platform is the underground station concourse, which contains washrooms, all three of the station's fare lines, and connects with all station exits. The concourse extends east and west from the visible station building, connecting to two western exits and one eastern exit. The eastern exit emerges as an open-air stairwell and elevator on the east side of the Uxbridge Sub near the original Kennedy GO station platform, and provides walking connections east along Eglinton Avenue. As of 2020 this area is undergoing construction to double-track the Uxbridge Sub, resulting in the demolition and replacement of the previous Kennedy GO station with two new side platforms. Potential modifications to the current TTC station exit to serve both new platforms are pending.

The two western TTC exits flank the east and west sides of nearby Transway Crescent. The east side exit consists of another open-air stairwell and elevator on the sidewalk, and serves as the main pickup point for passengers requiring the elevator. The west side exit is in the form of a passenger pickup and dropoff (PPUDO) island and circular indoor waiting room, ringed by a vehicle waiting loop. The waiting room is raised above grade by 3 steps like a stage, to provide a vantage point for passengers to identify their ride among a queue of waiting cars. A single staircase rises from concourse level into the middle of the waiting room; the entrance is not universally accessible.

Kennedy previously had a fourth, main exit facing north toward Eglinton Avenue, however this has been demolished for Line 5 construction, as the new platforms are situated immediately north of the original station box. The exit will be replaced with an above-ground headhouse as the new main entrance for the whole complex, and an expanded concourse linking the new Line 5 platforms with the existing station.

Above the concourse at ground level is the large bus terminal, serving 13 routes as of 2020. The terminal is within the fare paid zone, and consists of an indoor waiting area with a few retail kiosks, and outdoor sawtooth style platforms, all encircled by the bus roadway. The neighbouring GO station is at ground level, beside the bus roadway. Also at ground level are commuter park-and-ride lots (part of which have been disrupted by ongoing construction).

Elevated above the bus terminal is the Line 3 terminus, consisting of a single track flanked by platforms on both sides. This level is airy and bright, with window-lined walls and a clerestory vault over the track. The south side platform has been modified to extend out over a former second trackway, and provides elevator access. The north side platform is designated for offloading only (except for passengers requiring the elevator). This intended passenger flow is indicated by station signage; there is no physical barrier preventing contraflow traffic via the north side stairs, however the typically heavy unidirectional flow of customers on and off of trains is generally self-regulating.

All four levels are connected via a complex series of staircases, escalators, and elevators. Among these are two "express" escalators (one ascending and one descending) that connect directly between the bus terminal and the Line 2 platform two floors below, passing through the concourse level without stopping. Glass walls around the escalators prevent attempts to climb on or off midway.

Plans for the future Line 2 extension rejected repurposing the Line 3 alignment, instead calling for tunnels to continue eastward under Eglinton Avenue before turning north toward Scarborough Centre. The layout of Kennedy station was a factor in this decision, as the position and east-west orientation of the current Line 2 platform would prevent subway trains from turning sharply enough to join the north-south Line 3 alignment without digging a large, sweeping reverse curve under the neighbourhood to the northeast, or completely demolishing the station in favour of one at a gentler angle. The chronically low ridership of Line 3 stations between Kennedy and Scarborough Centre did not suggest that retaining the Line 3 alignment was worth the engineering challenges of either option.

Kennedy is one of the largest TTC station complexes, and as a forced transfer between Lines 2 and 3, saw over 110,000 daily weekday trips in 2018 (much of which double counts customers exiting Line 2 to board Line 3 or vice versa). Even still, Kennedy ranks among the system's busiest stations. The station is unique in connecting a GO Train line with multiple TTC lines, and for providing a transfer between underground and elevated rapid transit lines; at every other current TTC interchange station, all converging rapid transit lines are underground. For an anticipated period of approximately 5 years between Line 5 opening and Line 3 closing, Kennedy will become the first and so far only interchange between 3 TTC rapid transit lines.

The most unique element of Kennedy in its current form is the Line 3 area. At the time of Kennedy's construction, the Scarborough RT (now Line 3) was planned to be operated with CLRV streetcars. The station design anticipated this by including low-level side platforms and an elevated turnback loop west of the station (as CLRVs were single-ended and built with doors on the right side only). As an aesthetic choice, the loop encircles the PPUDO island on the ground below.

Prior to opening, the line was modified to use linear induction technology and multi-car trains. This included building new high-level platforms on top of the originals; the tile edge strip of the original low-level north platform can still be seen while standing on the current south platform. The station was then forced to undergo further modification due to challenges in fitting the ICTS rolling stock to the station's design constraints. The turnback loop and the northward curve at the station's east end are severely tight by rapid transit standards: in particular, the reverse curve exiting the turnback loop has a minimum radius of less than 20 m. Despite speed restrictions, the tight curves led to a series of derailments that ultimately prompted the TTC to remove the south track within the station, and repurpose the north track as a single terminating track, with a new reversing switch. The south platform was extended out over the former south trackway, to allow train doors on both sides to open simultaneously. This would speed up the offloading and loading process to reduce dwell time and mitigate the reduced frequency achievable with one terminal track. The track within the loop itself was retained in case a disabled train needed to be moved out of the way, however its troublesome history causes it to be rarely used.

Line 3 played an important role in the 2018 edition of Nuit Blanche, serving as both a gallery for installations in several stations and as an all-night shuttle to installations at Scarborough Civic Centre and inside the Scarborough Town Centre Mall. Kennedy temporarily housed the piece Mirrors of Babel - little g by Javid Jah. The installation consisted of a trompe-l'œil line art pattern applied to multiple structural elements on the south side Line 3 platform, that when viewed from one perspective aligned to create a twelve-pointed star design.