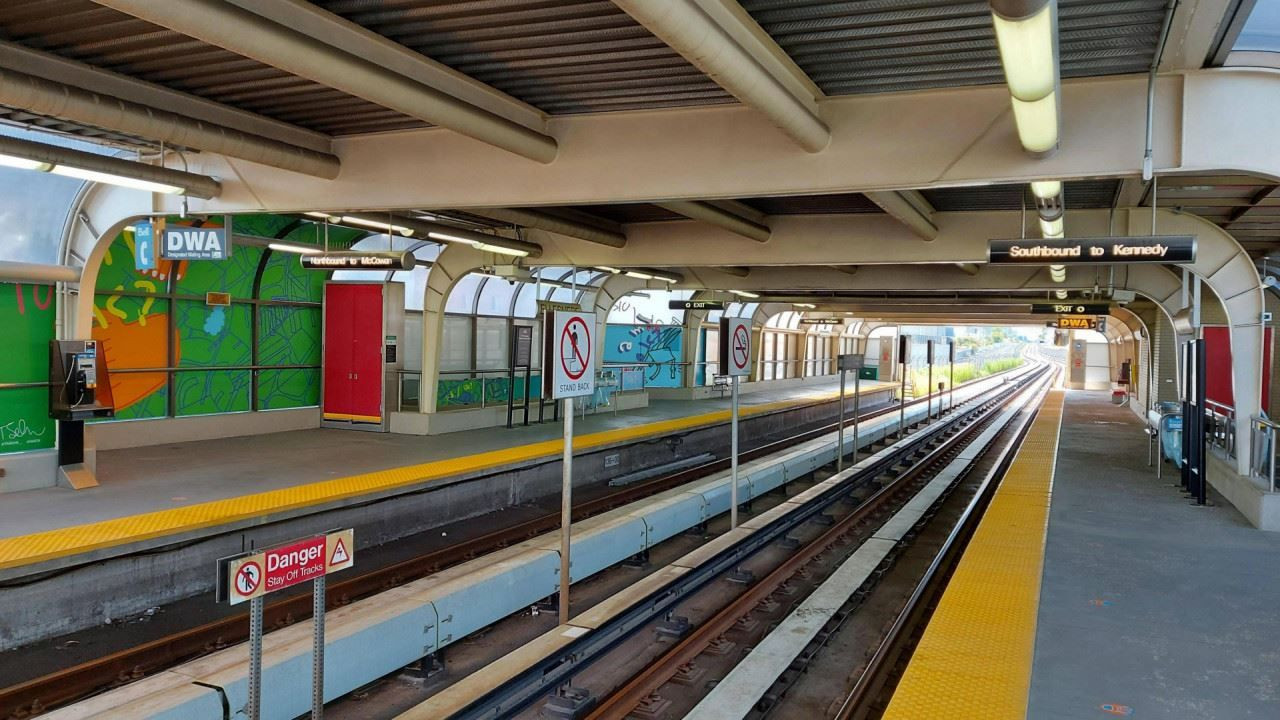 Ellesmere is situated at Ellesmere Road between Kennedy Road and Midland Avenue, in Scarborough. The station sits directly west of the Uxbridge Subdivision, owned by Metrolinx and served by the GO Stouffville Line (although GO trains do not stop). Ellesmere Road passes over the station and both rail lines via a bridge. The station is accessed via two service roads looping under the western and eastern abutments of the road bridge.

The area within walking distance of the station is predominantly industrial, with few trip attractors aside from employment. One bus route passes over the station on the Ellesmere Road bridge, however the ends of the bridge are each a distant walk from the station, especially in inclement weather. One branch terminates by looping on the western service road outside the western station entrance, however the overall quality of surface connections is poor by TTC standards.

As with all Line 3 stations, Ellesmere features two side platforms, signed as "Southbound to Kennedy" and perhaps oddly "Northbound to McCowan via Ellesmere" (compass designations vary by station on Line 3). Both platforms sit at grade. Immediately north of the station, the line slopes from grade level into a tunnel to cross under the Uxbridge Subdivision and turn east toward McCowan; the extreme north ends of the platforms have a slight downward vertical curve to match the track profile.

Each platform is connected by a single staircase with an underground concourse below the tracks, containing the fare line. The concourse is rather claustrophobic, featuring all-concrete surfaces, low ceilings, and dim artificial lighting. The unpaid side of the concourse is connected by underpasses to the service roads on the east and west sides of the rail line. As Line 3 was built before the AODA came into force, Ellesmere was not built to be universally accessible; Line 3 is also expected to be replaced by an extension of Line 2, so the TTC has not retrofitted the station with elevators.

Ellesmere opened in 1985 and its design aesthetic, consistent with the rest of Line 3, is a product of its time. The platforms are enclosed by a flattened arch roof supported by steel bents. The flat portion of the roof, above the tracks, is solid, with the walls and curved upper corners composed of blue glazed glass and bare aluminum mullions. In terms of general appearance, Ellesmere is most similar to its neighbour to the south, Lawrence East, although the underground space is more cramped and less inviting.

Ellesmere's chief claims to fame are its forlorn atmosphere and its lonely rank as Toronto's least used rapid transit station (enhanced streetcar lines not included): in 2018, the station saw an average of 1,770 daily weekday boardings. Key contributing factors are undoubtedly the station's isolated industrial location and inconvenient bus transfer opportunities. The low ridership is perhaps further exacerbated by the presence of Midland Station (itself the second least used station) 700 m northeast by shortest walking distance. Still, the combined ridership of Ellesmere and Midland would be less than half that of Lawrence East, 2 km to the south.

Line 3 played an important role in the 2018 edition of Nuit Blanche, serving as both a gallery for installations in several stations and as an all-night shuttle to installations at Scarborough Civic Centre and inside the Scarborough Town Centre Mall. Following the event, Ellesmere retained the piece Mirrors of Babel - Am I Okay? by Tabban Soleimani. The installation consists of abstract line drawings printed on decal wrap and pasted on the lower windows of the platform walls. The interpretation panel describes the piece as "an immersive installation that blends figures, shapes, and text to explore the bleak place of emotional and mental confusion lead by feelings of helplessness."