The Union Pearson Express (often stylized as UP Express, sometimes referred to as UPX) is a rail link between Terminal 1 at Pearson International Airport (YYZ) and downtown Toronto at Union Station. Travel times on the UP express are just under 25 minutes, compared to over an hour using other means.

While the UP Express is the first direct airport link to downtown Toronto, various proposals came over the years, including a failed procurement by Transport Canada in the early 2000s. Following its cancellation in 2010, Metrolink acquired the project and developed the "Air Rail Link", which became the Union Pearson Express.

Construction started in 2011 as part of the Georgetown South Project to add additional capacity to the Kitchener Line, allowing for the rail link to be created. The second part of the project, which started in 2012, included the subdivision to reach Pearson and its station. The Pearson subdivision is elevated and connects to the mainline under the 427 highway. Construction was done by AirLinx Transit Partners on behalf of Metrolinx who operates the line. In 2010, construction costs were planned to reach 456 million. 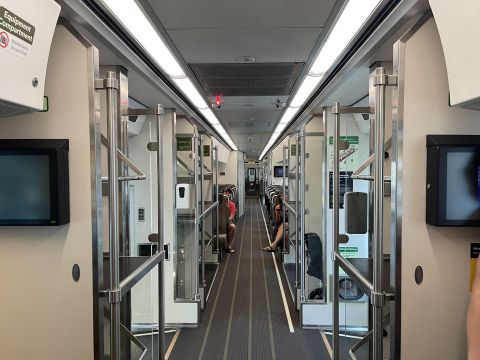 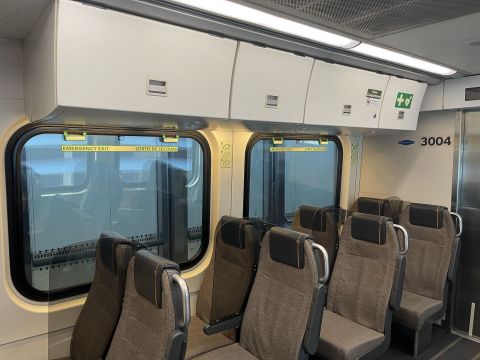 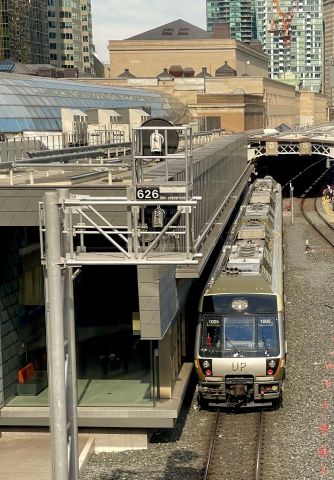 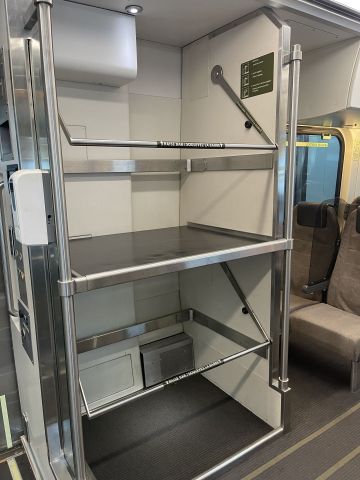 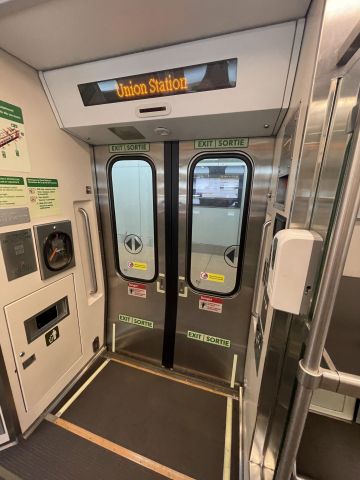 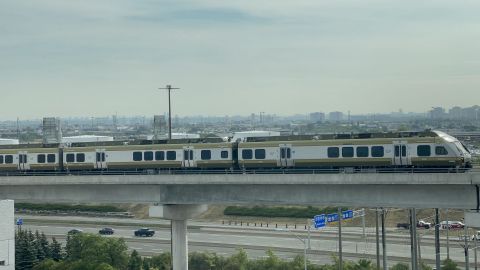 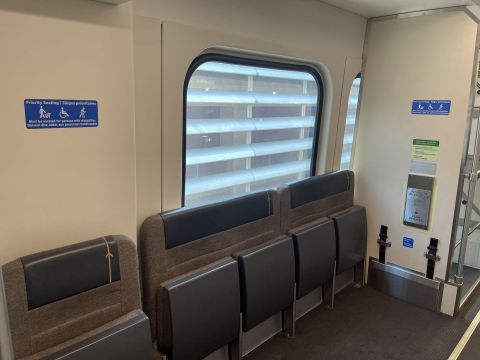 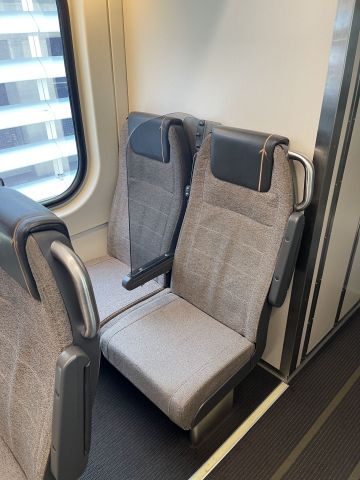 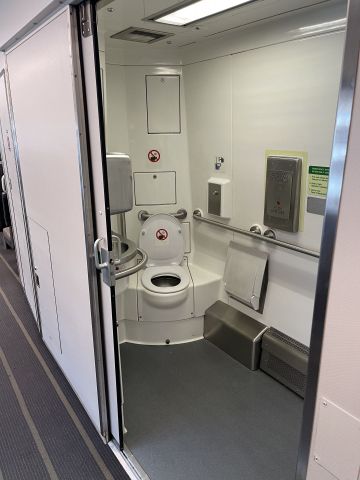 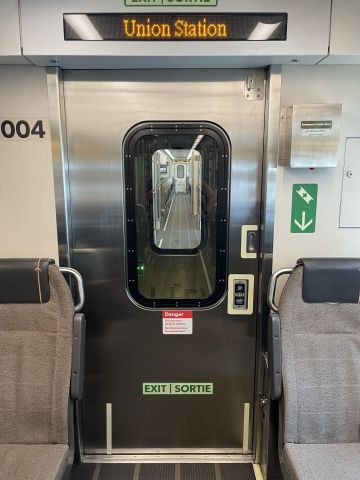 The vehicles are EPA Tier 4 compliant and, should UP be electrified, could be converted to electric operation (rough-ins for OCS are already found on the Pearson Spur). Each train-set features a UP Express livery, free Wi-FI, tray tables at every seat, accessible bathroom, luggage racks, passenger information displays and power outlets throughout.

As the trains do not turn around, seats are facing both directions of travel. Passenger capacity is 173 seated passengers in a three-car consist. 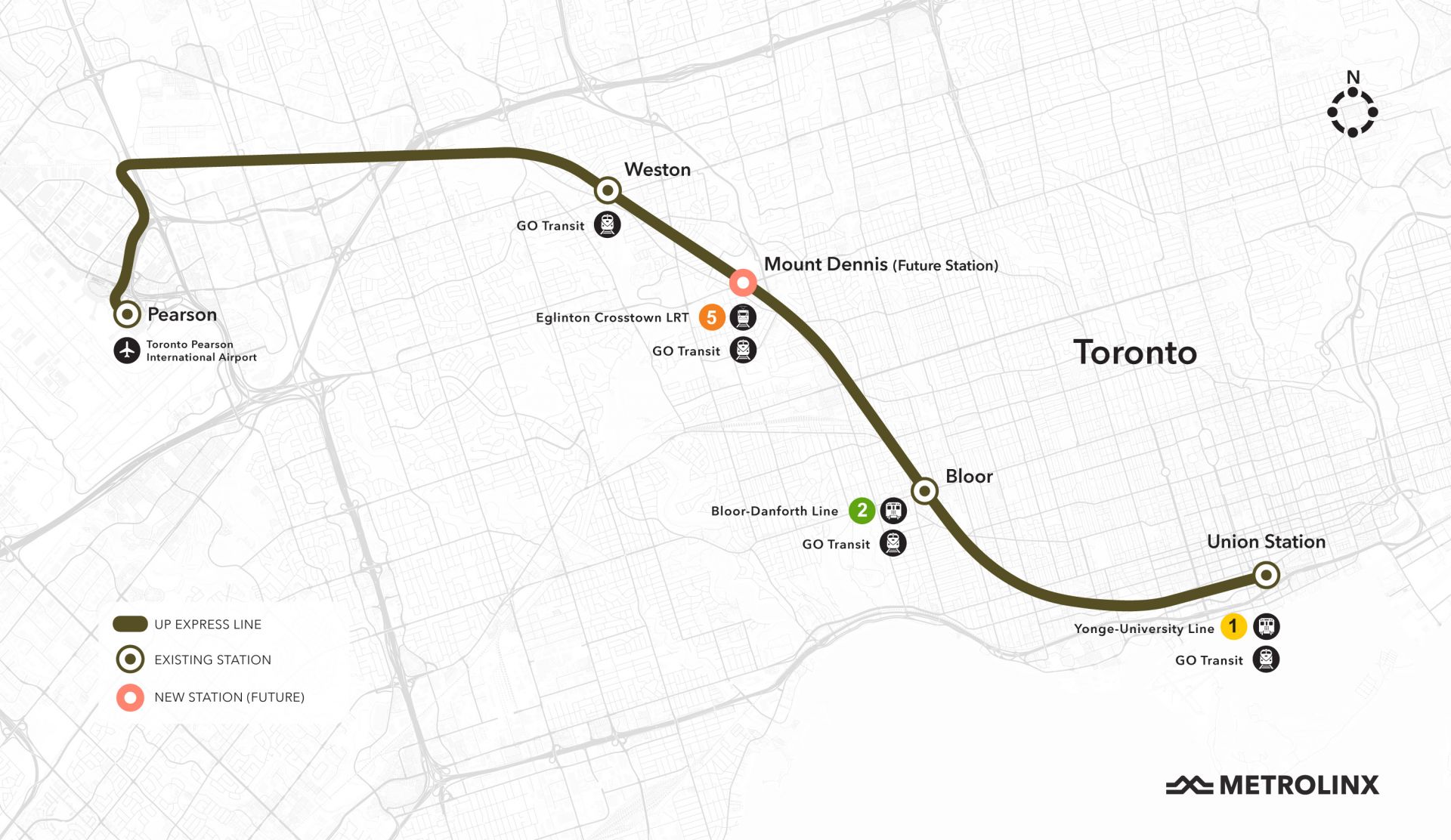 UPX operates between Union Station and Pearson International Airport using the Kitchener Line. Once the train reaches the 427 highway underpass, trains go onto the Pearson subdivision which is an elevated guideway to reach Pearson International Airport and avoid existing infrastructure. The tracks use standard gauge throughout with way-side signalling.

While Bloor and Weston are platforms at existing GO stations, Union Station and Pearson were purpose-built for UPX service and, as such, are fully-enclosed structures. Platform screen doors are installed at both stations to avoid track incursions, while overhead displays indicate the time of the next departure. At Union Station, a coffee shop and a lounge (UPstairs, affiliated with CIBC as of August 2022) can be found within the UPX station.

Four stops are found on the line:

Once construction is complete at Mount Dennis, a new station will open and connect with the Eglington Crosstown and other local bus routes.

When UPX opened in 2015, it was the most expensive airport link in North America with fares up to 27.50$ depending on the payment method.

Following disappointing ridership figures and a lack of popularity of the new service, fares were progressively reduced, with the introduction of GO fares between Bloor, Weston and Union Station, making it an alternative to the regular GO trains on the Kitchener Line.

Fares are enforced on an honour system where passengers must be able to provide proof of payment should they be asked for one. Payment methods are the following: Presto, Presto Contactless, ticket machine in the station and advanced online purchase. To pay the lowest fare, passengers are encouraged to use either of the Presto options and must tap in and out of the train using the Presto readers at all stations. Failure to do so results in the highest applicable fare on the route.

As of August 2022, children under the age of 12 do not need to pay a fare. Discounted fares are available depending on passengers, as well as special fares exclusive to UP Express (long-layover, meet and greet, family, etc.).

Before the onset of the COVID-19 pandemic, trains were every 15 minutes, from 5AM to 1AM every day. This was considerably reduced as passenger load and air travel considerably dropped during the pandemic and slowly recovers. As of August 2022, trains operate every 30 minutes.

For the most recent schedule, fares and service information, visit the Union Pearson Express website. 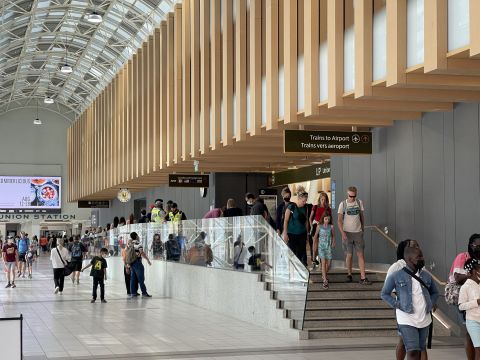 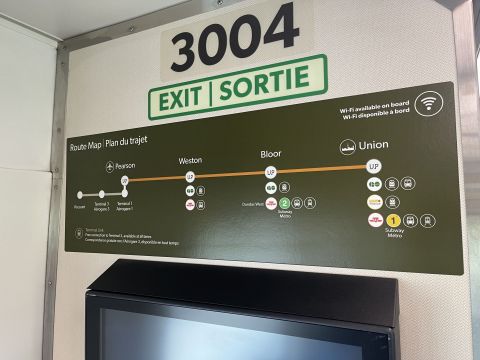 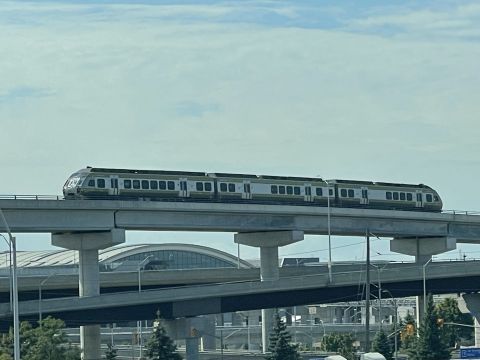 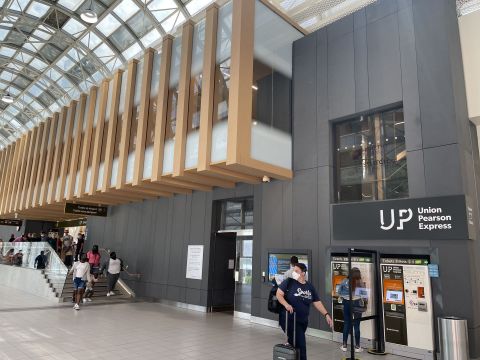 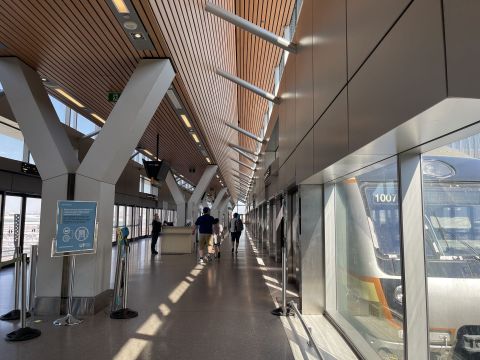 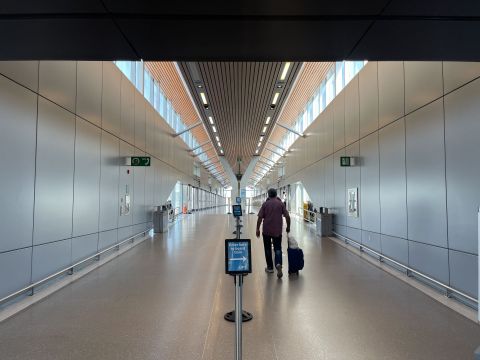 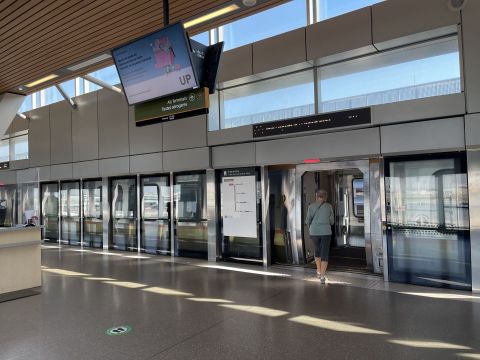 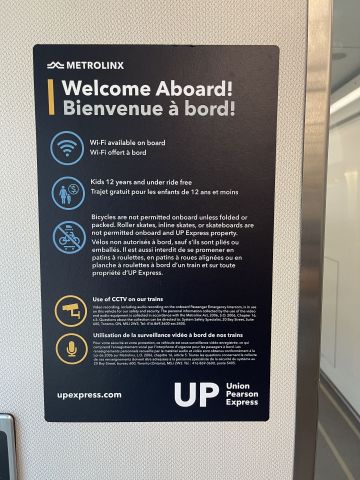 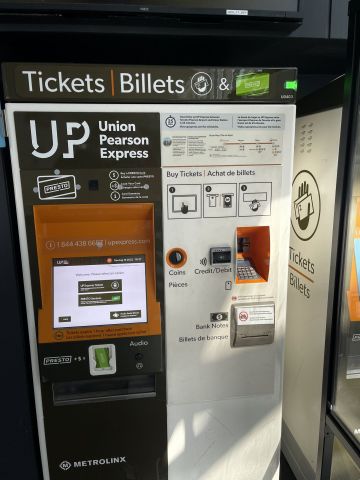 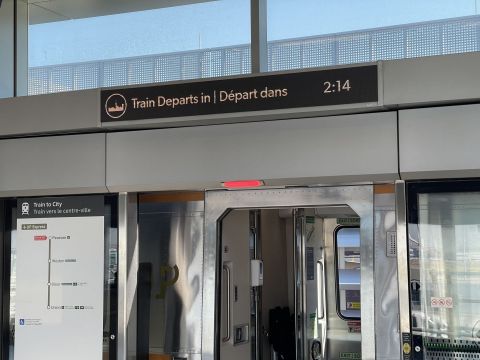 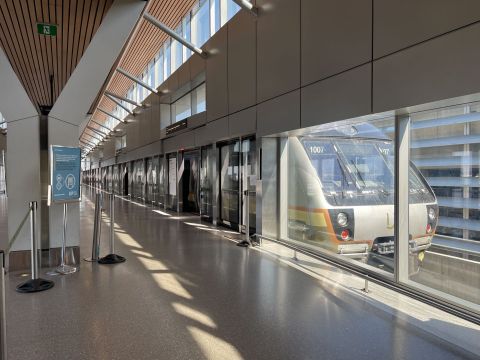 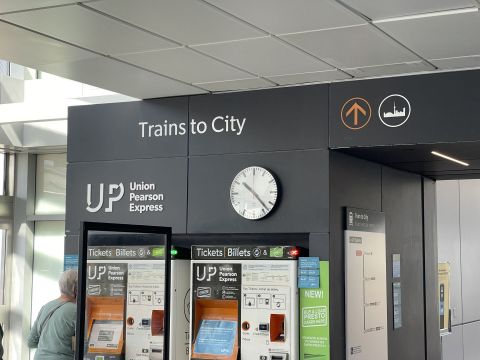