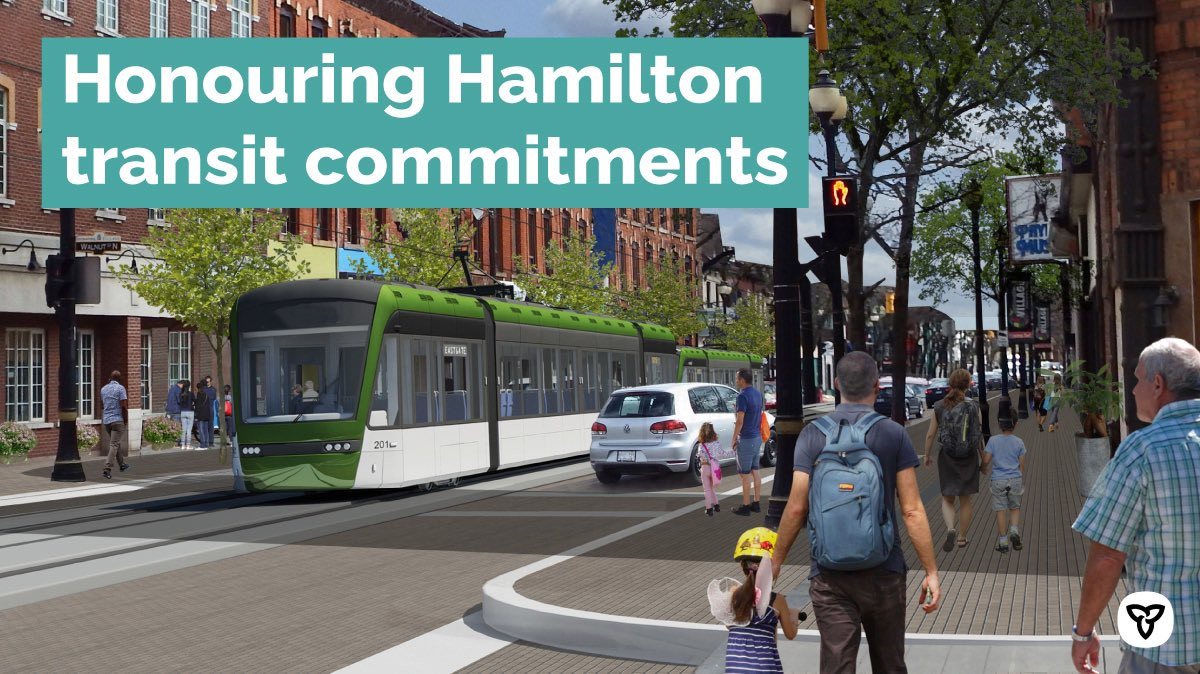 "We're keeping our word and honouring our $1 billion capital commitment to transportation infrastructure investments in the City of Hamilton, and we urge the federal government to join us in building a viable LRT," said Caroline Mulroney, Minister of Transportation. "It's going to take all levels of government to make a meaningful Hamilton LRT project a reality. Everyone is going to need to pitch in."

The original Hamilton LRT proposal, approved by the previous government, went from McMaster University to Eastgate Square. This proposal was found to cost significantly more than the reported $1 billion, as confirmed by the Auditor General. These previously-hidden costs posed an unsustainable burden on Ontario taxpayers and informed the decision to update the project proposal.

In response, the province created a Hamilton Transportation Task Force to work to help shape the future of high priority transit in Hamilton by providing new proposals. Within two months, the Task Force submitted its report providing recommendations on future transportation infrastructure for the City of Hamilton.

The Task force noted a higher-order transportation option, such as an LRT, to be their preferred option. Metrolinx has since been undertaking a technical review of the Task Force's recommendations to determine what options were possible, which has been received and reviewed by the Ministry of Transportation.

The technical review indicates a $1 billion LRT system funded solely with provincial capital would not be of sufficient length to be a viable project to benefit the people of Hamilton. The report suggests a longer LRT, for example running from McMaster and extending beyond Downtown Hamilton to Gage or further, could be a viable option pending federal funding. A feasible LRT project is therefore only possible if the federal government partners with the province.

"Our government's commitment has always been and continues to be $1 billion for transportation infrastructure for the City of Hamilton," said Minister Mulroney. "Canada, Ontario and the City of Hamilton have a shared responsibility to build transit infrastructure quickly and efficiently to keep people moving and drive business as we look to strengthen and rebuild our economy. Moving forward with this LRT project would mean Hamiltonians will finally get the transit they deserve."

"I was pleased to speak with the province this morning and welcome the news that they will be naming the Hamilton LRT as one of five priority transit projects," said Hamilton Mayor Fred Eisenberger. "We look forward to working with the provincial and federal governments to make this project a reality. Public transit is a priority of Council and I am grateful to Premier Ford and Minister Mulroney for helping to bring this important project back on track."

"Today's announcement recognizing the Hamilton LRT as a priority project is an optimistic step forward for getting shovels in the ground of this highly-anticipated project," said Joseph Mancinelli, LiUNA International Vice President and Regional Manager of Central and Eastern Canada. "Investing in significant transit infrastructure will continue to create thousands of jobs for LiUNA members and workers across the skilled trades, while addressing critical improvements to existing infrastructure, working collaboratively to invest, expand and strengthen communities across Ontario. On behalf of LiUNA, we look forward to a promising partnership with the provincial and federal government as we work together to get shovels in the ground on mass transit priority projects across the GTHA."

Never mind how they slash at least $100 million by not indexing it to inflation since 2015. Never mind how that $1B was originally just for capital costs, out of $3.66B total project lifecycle funding from the province. The playbook seems to be cripple it with a thousand cuts, then go after the feds for not chipping in enough.

Cancel Reply
Never mind how they slash at least $100 million by not indexing it to inflation since 2015. Never mind how that $1B was originally just for capital costs, out of $3.66B total project lifecycle funding from the province. The playbook seems to be cripple it with a thousand cuts, then go after the feds for not chipping in enough. Yeesh. Bad faith actors.
Cancel Update Comment