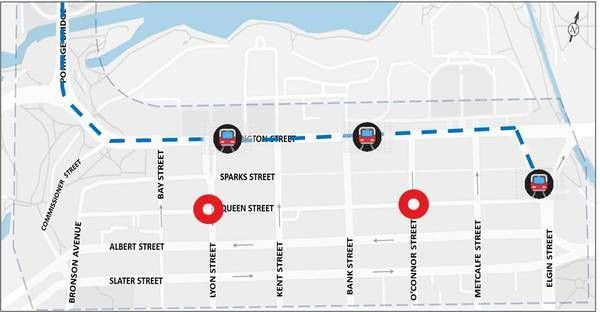 Following consultations with federal, provincial and municipal partners, as well as other key stakeholders, the National Capital Commission (NCC) has recently completed its analysis and provided a recommendation to the Government of Canada for the development and facilitation of the Société de Transport de l'Outaouais (STO) tramway that would connect Gatineau and downtown Ottawa (via the Portage Bridge).


The NCC's recommendation is that the STO tramway alignment into Ottawa take place along the surface of Wellington Street. Next steps to advance this potential project include further engagement with partners and implicated stakeholders and the coordination of studies to assess traffic, transit and other key considerations.

"Investments in safe, modern, and efficient public transit systems are at the heart of a clean, inclusive recovery that restarts our economy and creates good jobs. We have an incredible opportunity to transform our community and make it the greenest capital in the world. The Government of Canada is in full support of the Gatineau Tramway and is pleased with the National Capital Commission's recommendation for a surface tramway design to link the west end of Gatineau to downtown Ottawa, allowing us to continue working with the Government of Quebec and City of Gatineau to advance this important project. The Gatineau Tramway will connect regional public transit networks, reduce travel times, and help people get around in a cleaner, more affordable way."

– The Honourable Catherine McKenna, Minister of Infrastructure and Communities

– Greg Fergus, Member of Parliament for Hull-Aylmer and Parliamentary Secretary to the Prime Minister

"Given the many projects currently under way in Canada's Capital Region, the proposed interprovincial tram system via Wellington Street offers a unique opportunity to enhance the natural and cultural character of Canada's Capital for generations to come while contributing greatly to the municipal transit networks of both Ottawa and Gatineau."