NIMBY Rails was a highly anticipated game ever since it was first publicly announced by creator Weird and Wry. It is also unique in that it has no campaign, no missions or objectives to complete the game, therefore it is entirely open and freeform. Everything is possible right from the start and not gated or held back. Instead, NIMBY Rails is a completely open sandbox game, designed for the most devout Rail Fans, as well as the general public. It is important before going further to mention that NIMBY Rails is now available as an Early Release game on Steam, meaning it is not fully completed but has reached a stable state of development for the general public to enjoy as well as provide feedback, suggestions and bug reports. Updates are frequent and regular and add additional features, bug fixes and tweaks to further enhance the game.

The goal of this game is to allow you to design, layout and build a rail-based transportation system. This has been done in countless other games but the defining feature of NIMBY Rails is the ability to do it in any city or town in the world. The game features maps of the entire world, so you are free to design and build anywhere. This is huge, as in the past as with most other games, you are limited to a small selection of specific cities, or forced to use terrain tools to shape and model your city of choice, so this development in NIMBY Rails is a breakout feature and its biggest point. The game also makes use of population data to help simulate real-world passenger loads and densities around stations and rail lines.

Let me discuss some of the options available when creating a rail system by describing how it is done. The best approach I have found is to place your stations and station platforms, then connecting them with the track, followed by establishing your lines and selecting your train configurations and timetables. 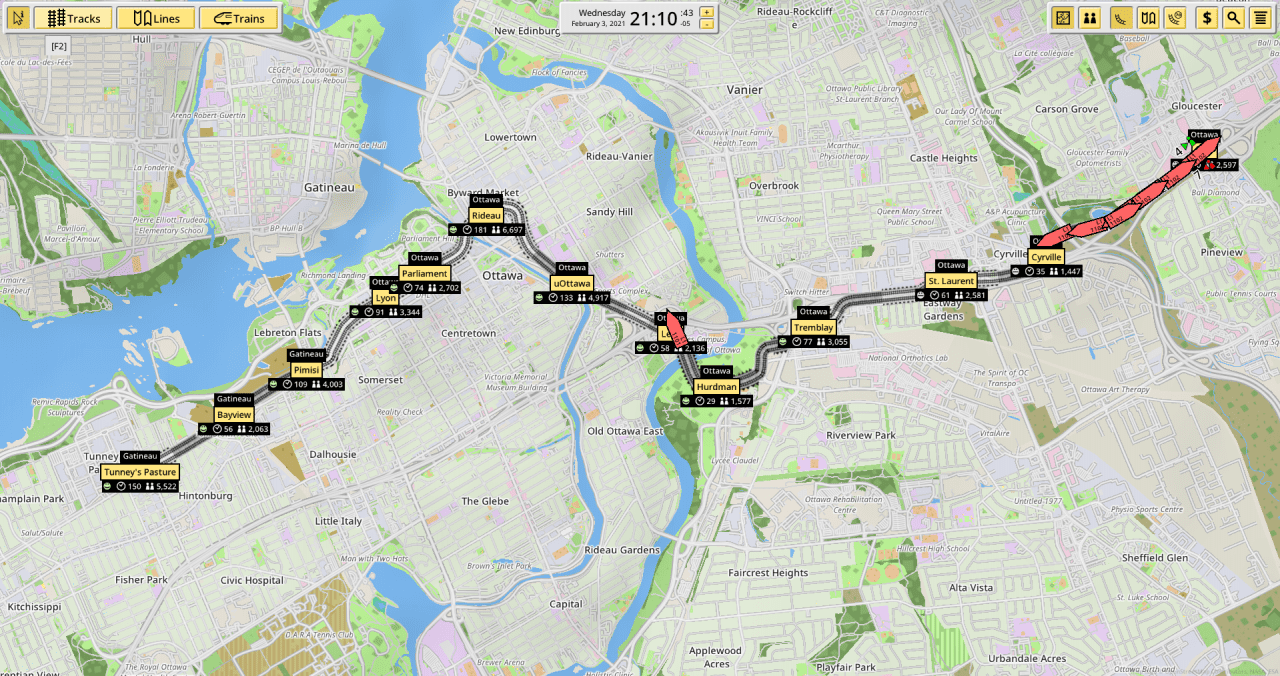 In the example above, I have recreated Ottawa's O-Train Line 1. You can see how the actual map of the city is used as the base layer, which allows you to place your stations and track on top. Stations and track each have 4 options, Viaduct, Ground, Tram and Underground. Stations can also be named as you choose but will default to nearby landmarks or locations if left unnamed. 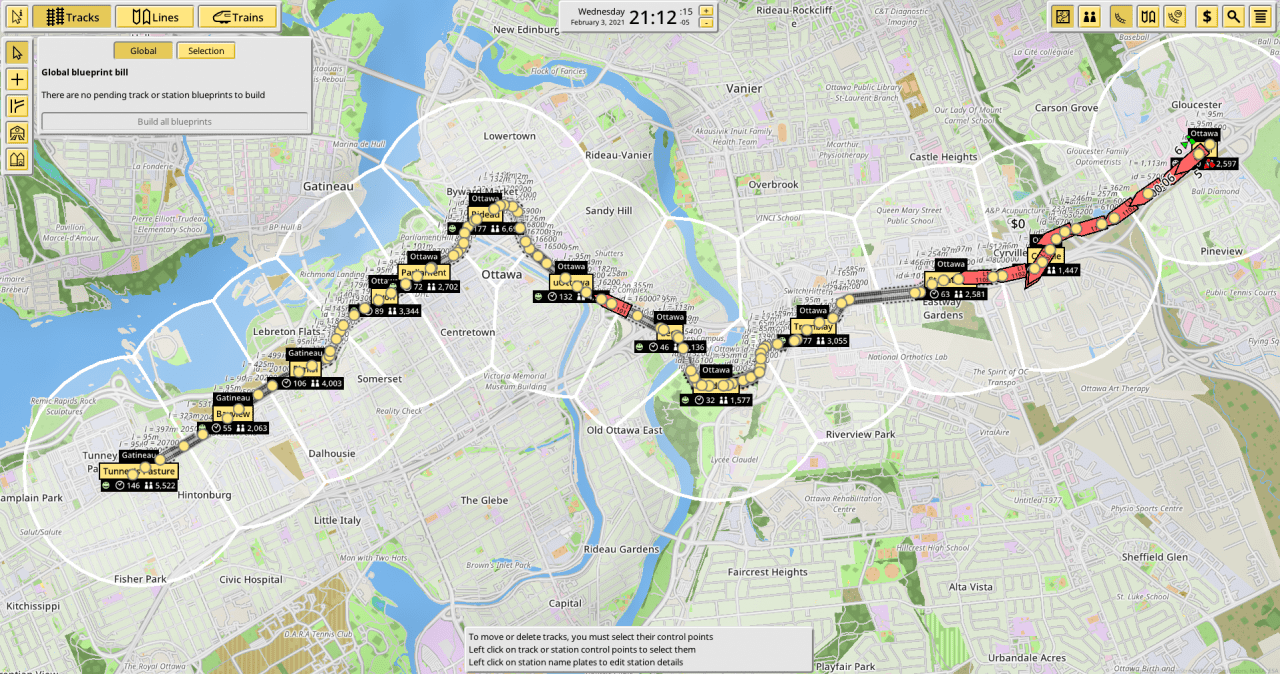 You can also view the catchment radius that the station serves. 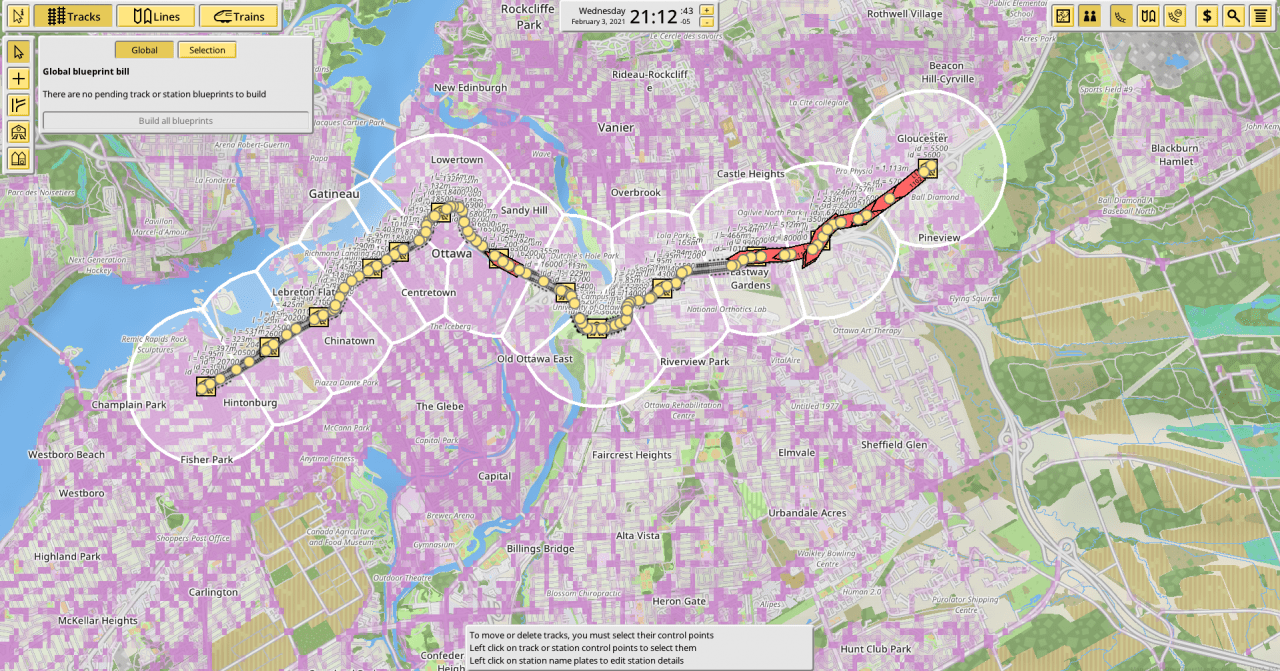 An overlay is also available to show population density, helping you make informed decisions on where the stations and lines should go. 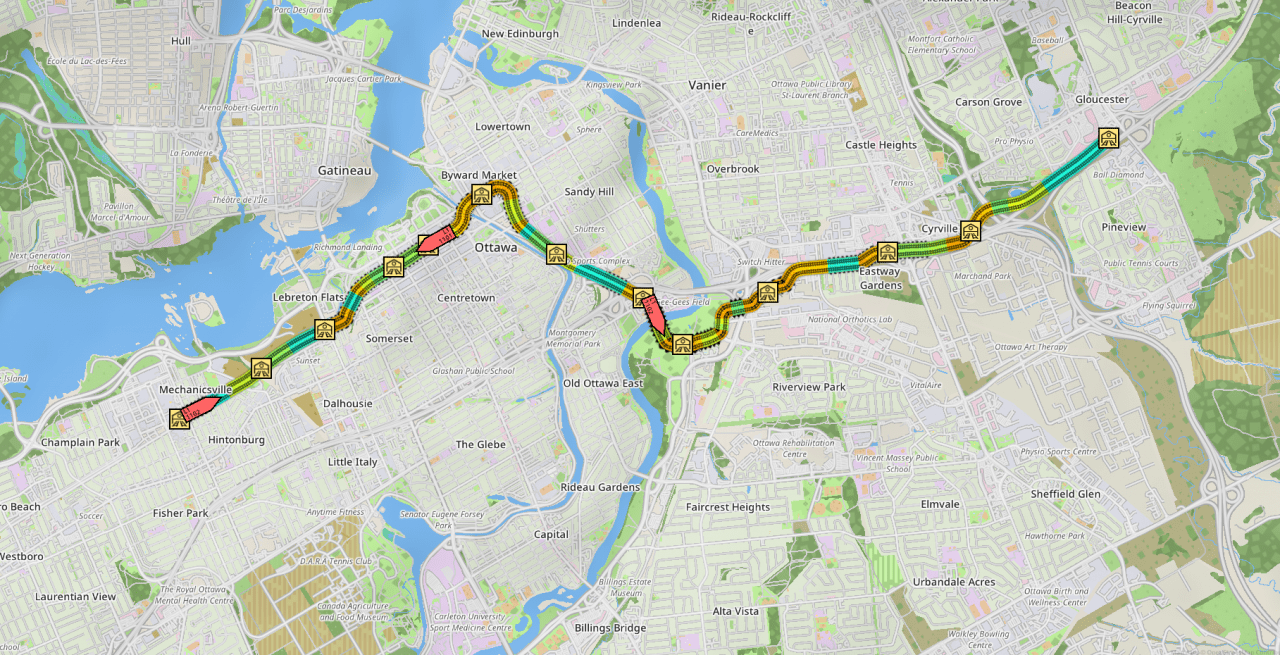 There is also an overlay to show track speed, which is based on the track profile (curves and turns). Straight sections typically yield higher speeds than curved sections. 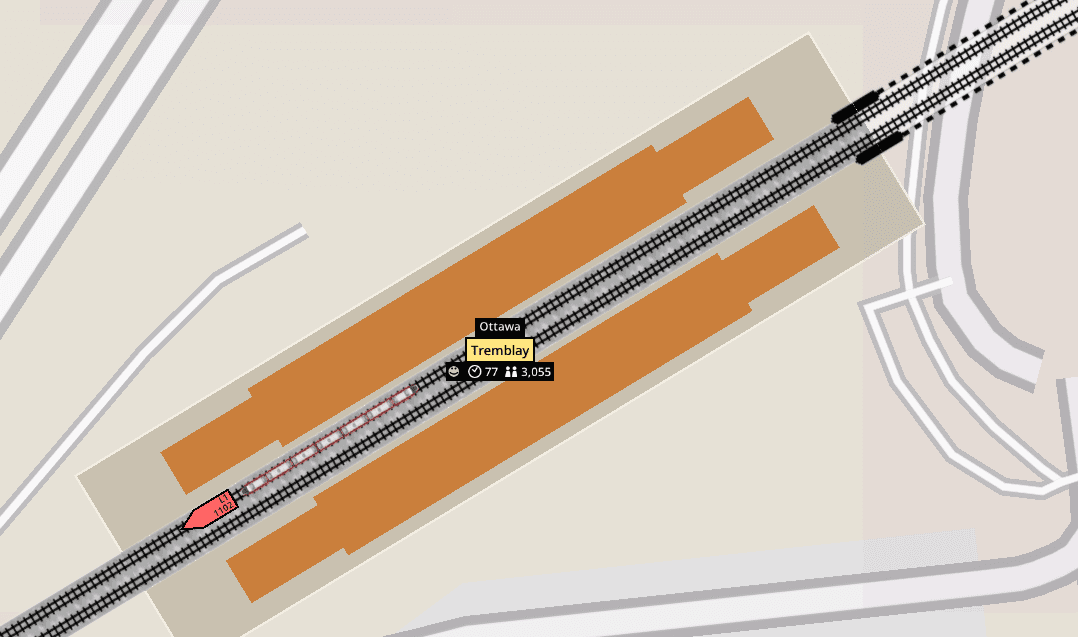 Here is an example of one a station, in which the location, orientation and length of the station platforms is entirely under your control. 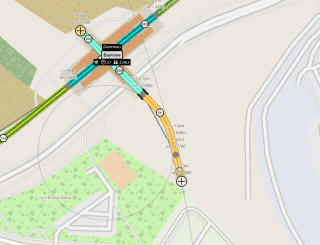 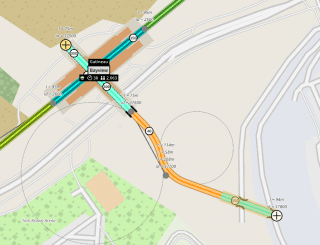 Now, let us add a second line that connects at Bayview. Starting off with placing the station platforms, then adding and attaching the track to head southbound. When placing track, the more points you add, the more you can control the position, curvature and profile of the track being placed. 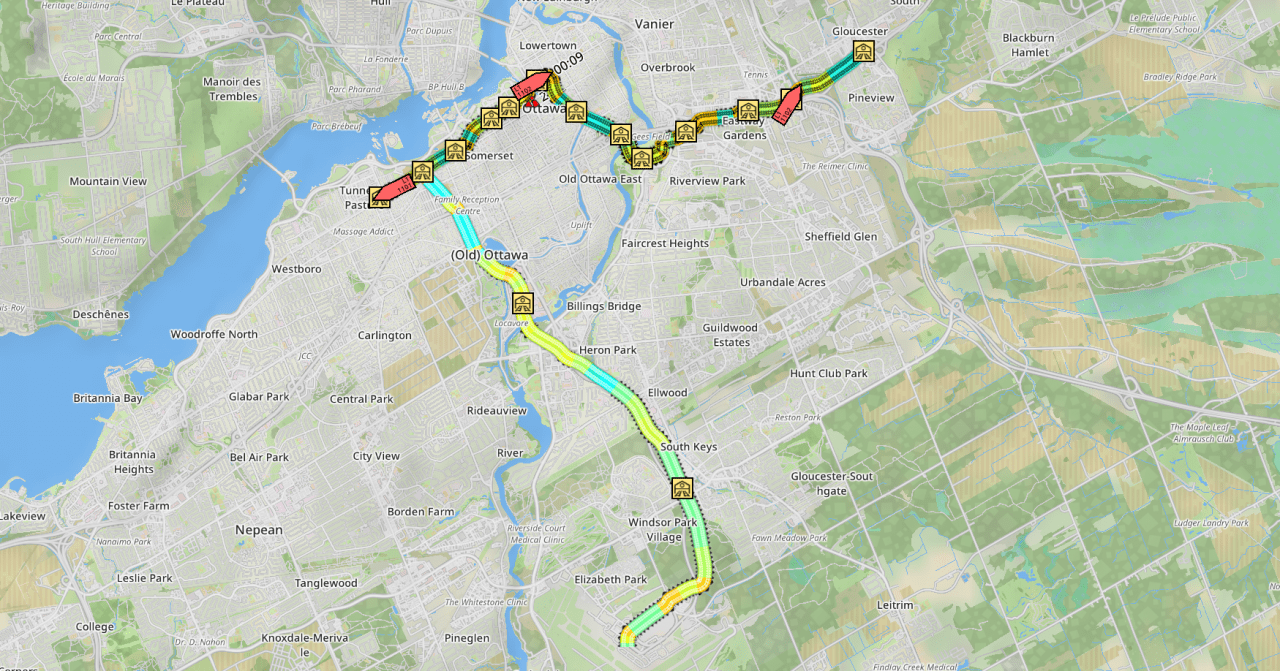 Continuing Southbound to the Airport, the game affords the freedom to make your own choices, and as such, this line was designed to be an express service to Carleton University, South Keys and the Airport. 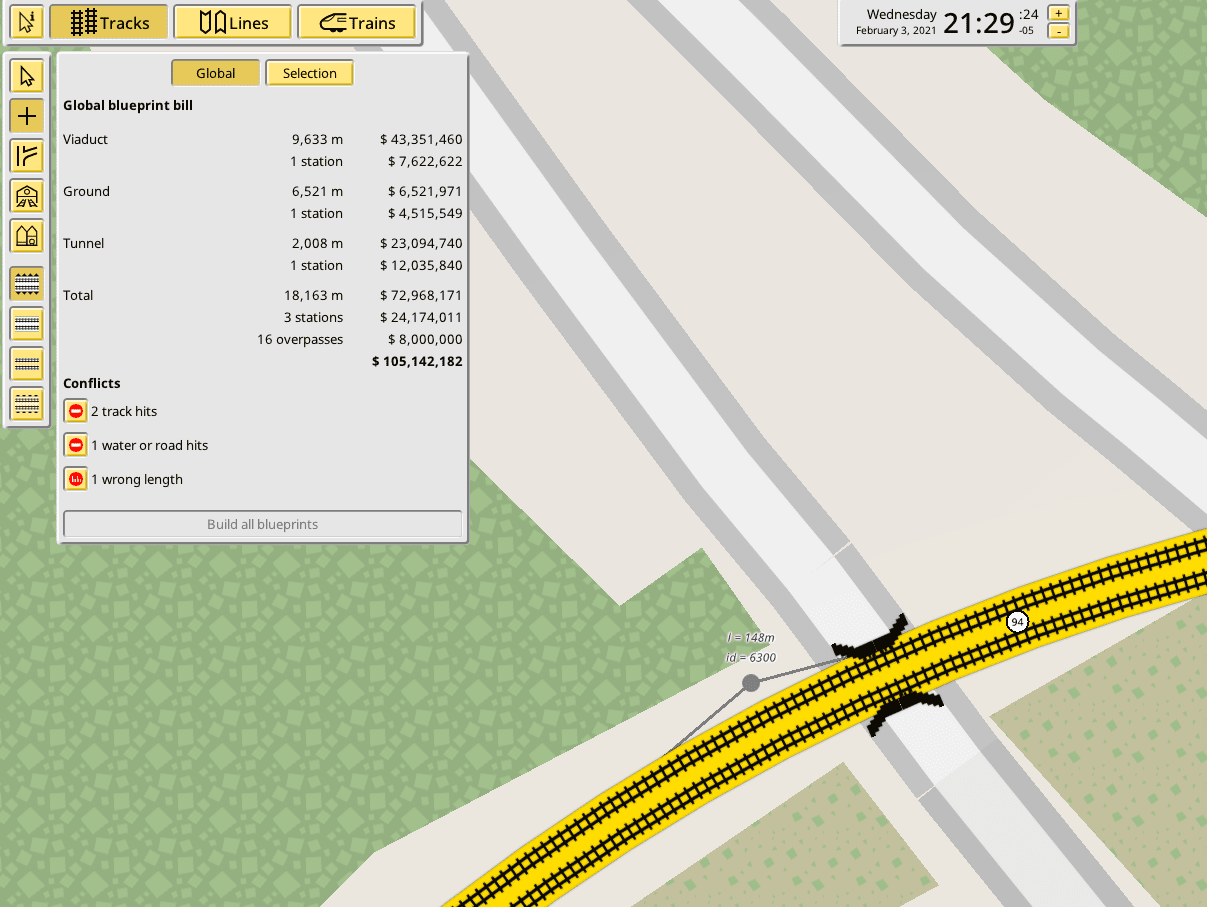 While laying out your stations and track, the game provides you with a cost involved in the construction. While you can choose to play the game on a budget, you can also play with unlimited money, giving you the opportunity to build as you see fit without financial constraints. 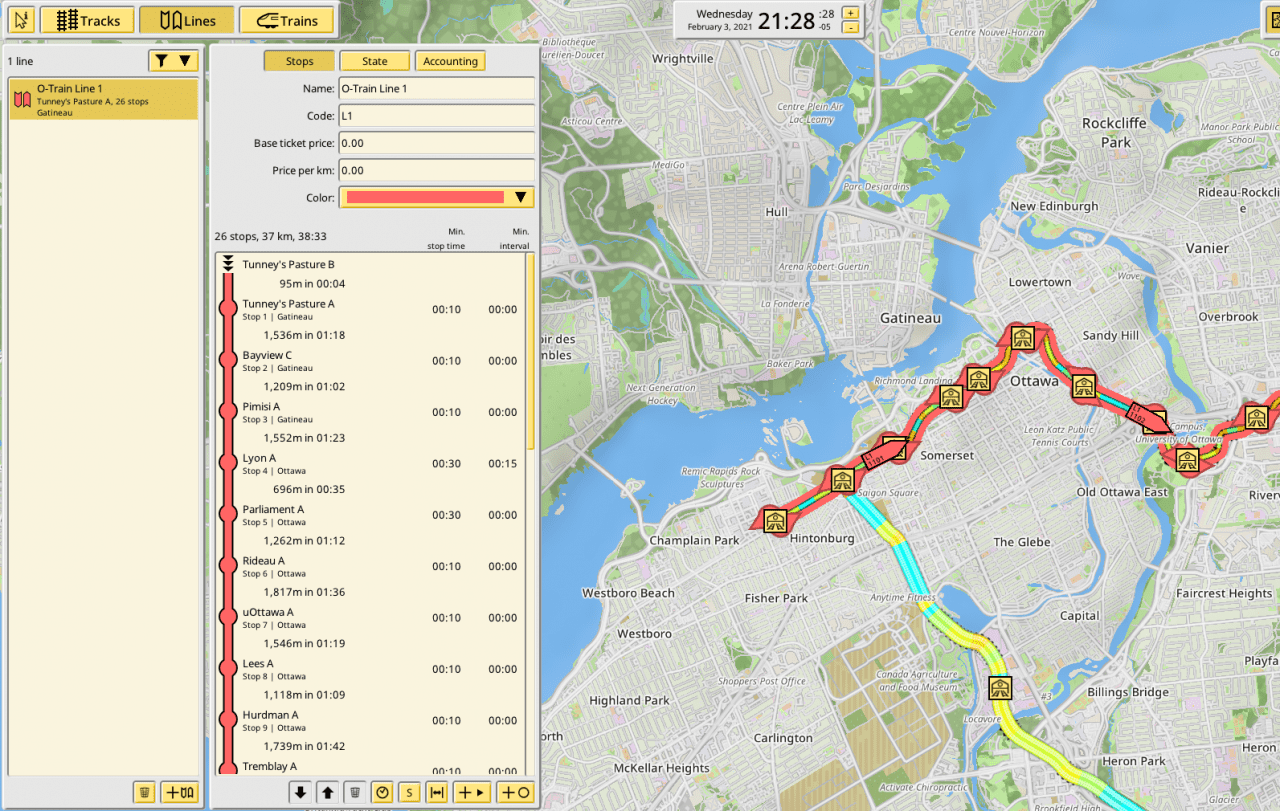 With the stations and track built, it is now time to turn attention to establishing the line itself. Creating a line involves specifying which stations the train will stop at, as well as stop time (dwell time) and interval (frequency). For those wanting to micro-manage everything, you can also set up a cost structure, including fares, based on ticket price and a price per kilometre. Finally, the line can be named, given a code and colour to distinguish it from others on your network. 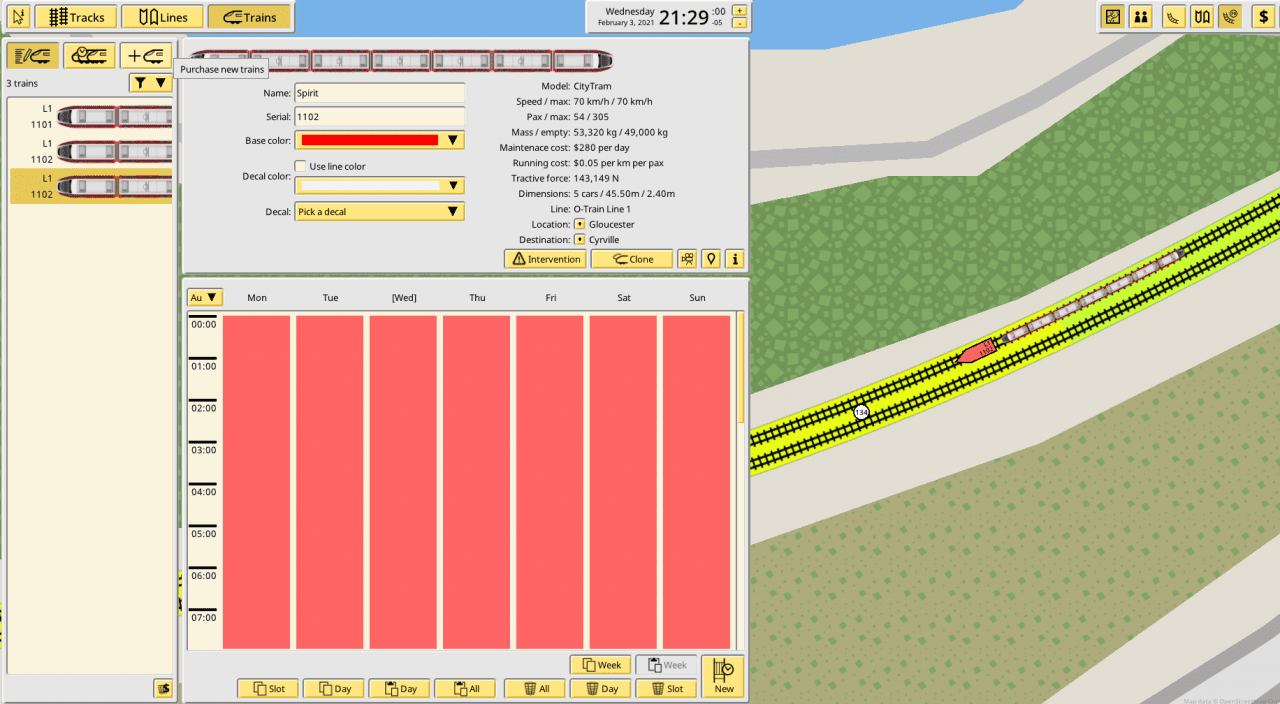 Next, it is time to purchase some trains. Again here, you have plenty of options, from the style of the train (which dictates capacity and speed, among other things), to name, colours and decals. A train also needs to follow a schedule, so you can go as detailed as you wish or just have it follow the same schedule all day, every day to keep things simple and moving. 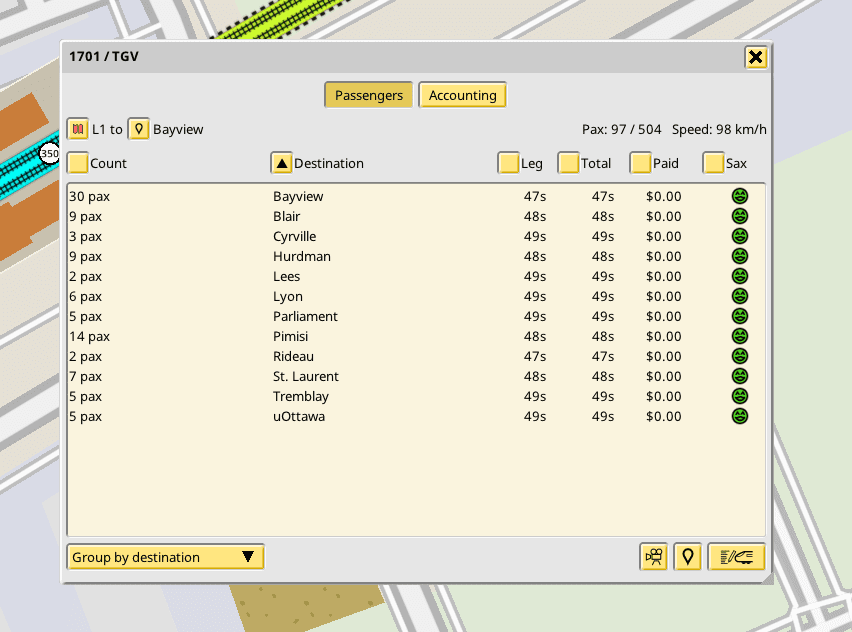 Once trains are moving, you can select each to see a breakdown of passengers on board and their destination stations. Passenger satisfaction can also be viewed on the train, and in the station.

While this is just a brief overview of NIMBY Rails in use, you can clearly see that there is a great deal of thought put into this simulator. From a visual perspective being able to build in any city onto real-world maps, simulating passenger flow and usage, operating multiple lines or even branching or interlining, are all possible.

The developers Wierd and Wry have plans for more functionality and features to be added over time as the game continues to develop and grow. As it is currently there are some things that can not be accomplished in-game but are planned for the future. This includes single track operations, as currently the game only proposes double-track arrangements, as well as signals and balises for more control over the operation and movement of the trains. There is also a multiplayer component to the game in which others can join in and collaborate in the design, build and construction of your system.

NIMBY Rails is a great tool for experimenting with rail expansions or new constructions. The possibilities are endless of what you can do and design. Weird and Wry have truly satisfied the creative side of rail in a way never before done, through the use of real-world maps, allowing the element of discovery and creativity to be brought into any city and even your own.

The developer Weird and Wry are very responsive and active on Discord, so providing feedback and helping to shape the game as development continues is very easy and interactive. A community has already formed around the game and there are already Mods being created and available through Steam, which add among other things, additional train models.

NIMBY Rails is highly recommended, for anyone with even a passing interest in rail as it truly allows you the freedom to explore and develop rail in any city around the world.

Purchase NIMBY Rails on Steam by following this link : https://store.steampowered.com/app/1134710/NIMBY_Rails/

NIMBY Rails was released January 26, 2021 on Steam as an Early Release title. The game was reviewed on PC using a review download code provided by Weird and Wry.

A Discussion on VIA Rail's New Fleet for the Corridor with David Bellerive - December 2021
December 01, 2021 VIA Rail Delivers New Levels of Comfort, Accessibility, and Sustainability With Its New Corridor Fleet
December 01, 2021