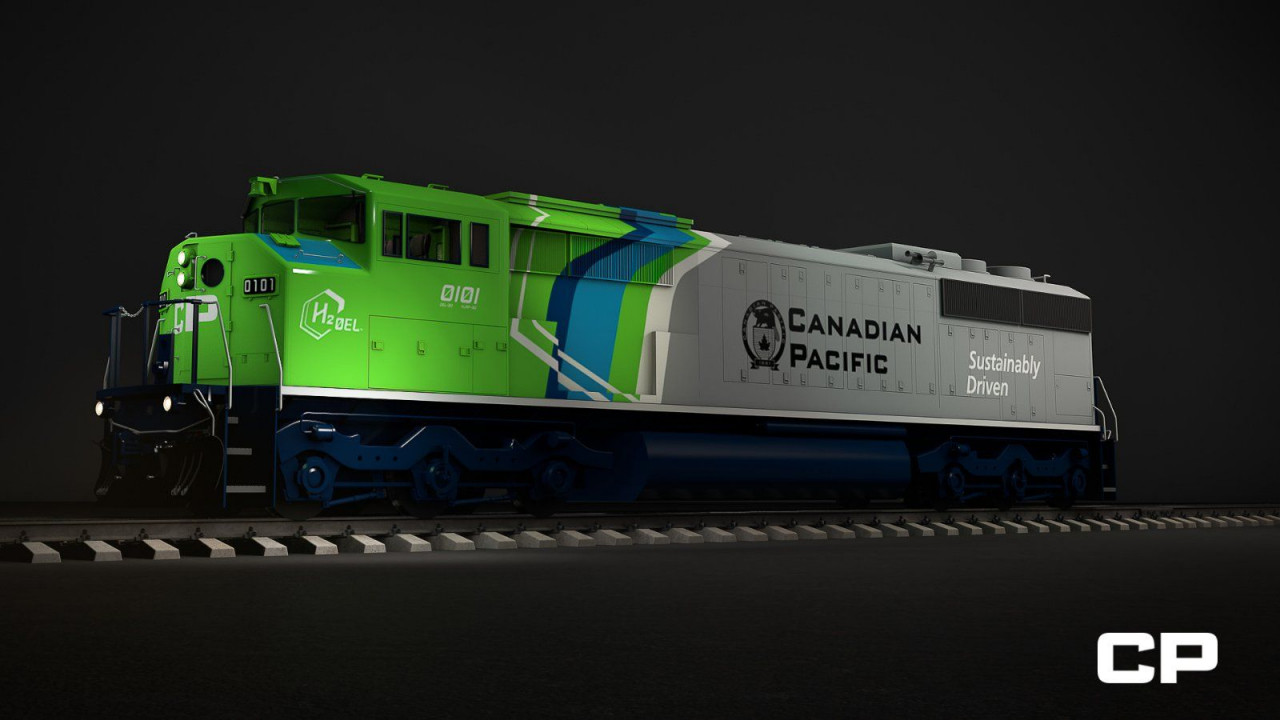 Canadian Pacific (TSX: CP) (NYSE: CP) will dramatically expand the scope of its pioneering Hydrogen Locomotive Program with a $15 million grant announced by Emissions Reduction Alberta (ERA) today. The grant enables CP to increase the number of hydrogen locomotive conversions in the project from one to three and add hydrogen production and fueling facilities. The program will create a global centre of excellence in hydrogen and freight rail systems in Alberta.

"In expanding this groundbreaking project, CP is demonstrating its commitment to combatting climate change through transformative technology," said Keith Creel, CP's President and Chief Executive Officer. "I am very pleased that ERA selected this program for a grant and I eagerly anticipate seeing a hydrogen-powered locomotive move CP customer freight in the near future."

CP is receiving the 50/50 matching grant from ERA's Shovel Ready Challenge program. It builds on the $15 million CP already planned to invest in the development project in 2021.

In December 2020, CP announced it would design and build North America's first line-haul hydrogen-powered locomotive using fuel cells and batteries to power the locomotive's electric traction motors. With the grant announced today, CP will build upon its early program research to convert an additional line-haul locomotive and a yard switcher locomotive. This work will refine the process of converting diesel-electric powertrains to hydrogen-electric powertrains over a series of three categories of locomotive, which collectively represent most locomotives in use throughout North America.

To support hydrogen locomotive operations, the project will include installation of hydrogen production and fueling facilities at CP railyards in Calgary and Edmonton. The Calgary fueling facility will include an electrolysis plant to produce hydrogen from water. This facility will operate on renewable power from solar panels at CP's headquarters campus and produce zero greenhouse gas emissions. The Edmonton facility includes a small-scale steam methane reformation system that will generate hydrogen from Alberta's natural gas resources. The system will be constructed to accommodate the possible future addition of greenhouse gas capture equipment.

"Alberta is investing to lead the transition to affordable, reliable and clean energy. CP's initiative represents a highly compelling opportunity to catalyze the hydrogen economy in Alberta and around the world," said Steve MacDonald, CEO of Emissions Reduction Alberta. "The project will help scale up technology and bring down the costs of deploying hydrogen to address the critical challenge of decarbonizing the long haul, heavy-freight sector."

CP's Hydrogen Locomotive Program will demonstrate and evaluate the technical performance of hydrogen-powered locomotives and supporting fueling infrastructure in real-world operations. The program will generate critical industry knowledge and experience that will inform commercialization and future development.

This news release contains FLI relating, but not limited, to: the scope of the Hydrogen Locomotive Program; the creation of a global centre of excellence in hydrogen and freight rail systems; the anticipated impacts of such developments on CP's operations, priorities and plans, and certain anticipated future strategies, plans and goals relating to sustainability.

Although we believe that the FLI is reasonable based on the information available today and processes used to prepare it, such statements are not guarantees of future performance and you are cautioned against placing undue reliance on FLI. By its nature, FLI involves a variety of assumptions, which are based upon factors that may be difficult to predict and that may involve known and unknown risks and uncertainties and other factors which may cause actual results, levels of activity and achievements to differ materially from those expressed or implied by these FLI, including, but not limited to, the following: the fuel efficiency of railways and CP's operations; CP's ability to implement certain initiatives, including emissions targets, scenario analyses, risk mitigation strategies, changes to enterprise risk management and internal carbon pricing mechanisms; CP's ability to develop North America's first hydrogen-powered line-haul freight locomotive; the possibility of eliminating emissions from freight train operations; ATCO's ability to construct and operate the fueling facilities; future investments in and the availability of carbon emissions-reduction tools and technologies including through CP's fleet modernization program and technology upgrades; the impacts of existing and planned capital investments; CP's ability to work with governments and third parties to mitigate the impacts of climate change; the possibility of eliminating emissions from freight train operations; North American and global economic growth; commodity demand growth; agricultural production; commodity prices and interest rates; the performance of CP's assets and equipment; applicable laws, regulations and government policies; the availability and cost of labour on the timelines anticipated and with the capabilities required, as well as the availability and cost of services and infrastructure; sufficiency of CP's budgeted capital expenditures in carrying out CP's business plan; the satisfaction by third parties of their obligations to CP; the impacts of the novel strain of coronavirus (and the disease known as COVID-19); and capital investments by third parties.

We caution that the foregoing list of factors is not exhaustive and is made as of the date hereof. Additional information about these and other assumptions, risks and uncertainties can be found in reports and filings by CP with Canadian and U.S. securities regulators. Reference should be made to "Risk Factors" and "Management's Discussion and Analysis of Financial Condition and Results of Operations - Forward-Looking Statements" in CP's annual and interim reports on Form 10-K and 10-Q. Due to the interdependencies and correlation of these factors, as well as other factors, the impact of any one assumption, risk or uncertainty on FLI cannot be determined with certainty.

Except to the extent required by law, we assume no obligation to publicly update or revise any FLI, whether as a result of new information, future events or otherwise. All FLI in this news release is expressly qualified in its entirety by these cautionary statements.

About Canadian Pacific
Canadian Pacific is a transcontinental railway in Canada and the United States with direct links to major ports on the west and east coasts. CP provides North American customers a competitive rail service with access to key markets in every corner of the globe. CP is growing with its customers, offering a suite of freight transportation services, logistics solutions and supply chain expertise. Visit cpr.ca to see the rail advantages of CP. CP-IR