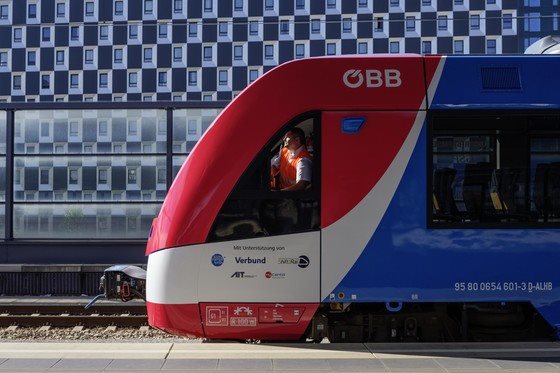 These important milestones make Austria the second country in Europe, after Germany, to fully approve of the Coradia iLint as an emission-free alternative to diesel multiple units. Alstom once again underlines its world-leading position in hydrogen mobility by rail - no other train manufacturer can currently offer a proven, tested hydrogen train ready for series production.

"We are immensely proud to confirm that the Coradia iLint has proven that it is suitable for all service routes – even on steep sections its performance is convincing. Not to mention our pride in the fact that the train has now received official approval in Austria. I also congratulate OBB for being a pioneer in testing hydrogen technology on rail in Austria," said Gian Luca Erbacci, Senior Vice President of Alstom Europe.

During the three months of testing on four demanding routes in southern Lower Austria, Vienna and eastern Styria, ÖBB and its passengers witnessed operability and performance of the new drive technology based on fuel cells - even on steep track sections and under the most varied climatic conditions. ÖBB is very positive about the hydrogen train and the test run. Following the successful operation in Austria, the data collected will now be analysed to further perfect the technology for the context.

Approval of the Coradia iLint as the only hydrogen train for the Austrian railway network by the Federal Ministry for Climate Protection, Environment, Energy, Mobility, Innovation and Technology (BMK)

Alstom has successfully tested its Coradia iLint fuel cell train for ten days on the 65 km route between Groningen and Leeuwarden in the Dutch province of Groningen.

After 530 days and more than 180,000 driven covered, the successful trial operation of the world's first two hydrogen trains in the Weser-Elbe network comes to an end.

Approval for passenger transport on the German public network

First test runs of the Coradia iLint on the company's own track in Salzgitter at 80 km/h and in Velim (Czech Republic) at up to 140 km/h.

Alstom and the Local Transport Authority of Lower Saxony (Landesnahverkehrsgesellschaft Niedersachsen, LNVG) sign a contract for 14 Coradia iLint trains to replace the existing diesel trains from the beginning of 2022.

A transformational step for Alstom: completion of ...
Bombardier and Alstom Confirm Receipt of All Neces...